In October last year after I visited Clark Dam, one that controls the Derwent River’s waters,  I posted my story and at least one of the photographs published in today’s paper appears to be a cut down version of my photographs.  I have never added copyright protection to my photos so I am glad to have been of assistance in getting the message out and showing the community what has been removed. 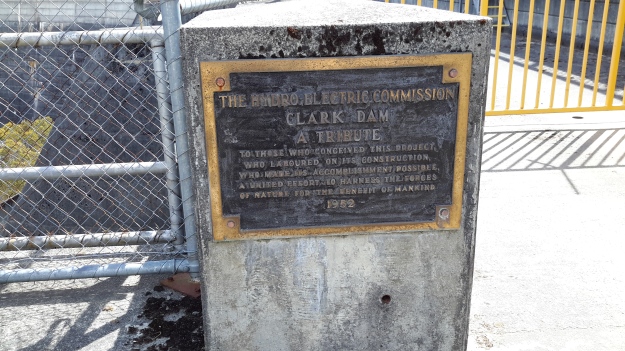 Clark Dam is isolated and remote and few people drive there:  the gravel road leading to the Dam at Butlers Gorge would not be driven on in hire cars by tourists, so I am guessing the person who removed these plaques is probably a fisherman who visits the area ready to put a boat out onto Lake King William.  It is someone with local knowledge that few people will be in the area. The plaques would have offered some resistance during their removal – they were strongly attached – so it seems to me that a purposeful perhaps pre-planned effort has been made by the thief.

Recently I was in the vicinity, but having previously walked in the area I bypassed the Dam wall so I missed seeing the gaping ‘holes’.  I would have been horrified.  Whether the taker took the plaques for reasons of greed or souveniring, they are markers of early mid-20th century Tasmanian history and need to be returned – if not reinstalled, then dropped on the doorstep of a police station.

As my bus from home into Hobart city passed over the Tasman Bridge before 7am, I looked down onto a dozen or so rowing boats slipping along the Derwent River. The wedges that their passing craft made were the only patterns on the still surface of the River.

The morning was suffused with golden light forewarning the rise of the sun over the hills.  The few wisps of cloud in an otherwise blue sky were coloured silvery pink.  The temperature was a brisk 8 degrees, but I felt clean and alive prompted by such a vital looking day.

Once in the city, I walked to Franklin Square ready to wait for the next bus to Blackmans Bay, my starting point for Stage 13. While waiting, I walked through the park and admired the grand symmetrical fountain splashes around a large bronze sculpture of the eminent 19th century Rear Admiral Sir John Franklin.  Overhead, I watched a squawk of Sulphur-Crested Cockatoos, with their wings lit by the first rays of sunshine, flying as a family.  Street cleaners were clearing rubbish bins and pathway surfaces.  Very few other people were out and about in the centre of the city (people were being active in the suburbs before commuting to work in the city a while later).

The large public chess set had been set out and was ready for play. 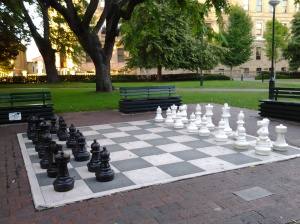 As the sun struck the Treasury buildings at one end of Franklin Square park, clusters of fat seagulls (Silver Gulls) were nipping at early rising insects across the grass lawns.

Metro bus number 84 departed at 7.17am. By 7.33am we had climbed up and travelled along the Southern Outlet and were passing through Kingston. This gave me a clear cut side view of majestic Mount Wellington.  Every rock was hard edge and clear. The air was so clean.

At 7.41am I stepped off the bus at Wells Parade in Blackmans Bay, the location where I had finished Stage 12 of my walk.  The final walk to the mouth of the Derwent River was about to begin.