My journey continued up a hill where I recognised two track options; one inside a fence line, and another outside the fence at the top of the cliffs on the side of the Derwent River. I took the track outside the fence (I watched the following children and they were evenly divided between the inner and outer tracks- obviously their teachers thought the outer track to be safe), and at the top of the hill there was an opening to step through the fence and return to a 4 wheel drive track.

The air was clear. The day was warming up. The views in every direction were sensational. One of those experiences that makes me so happy to be alive. 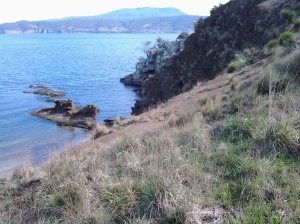 The photo above looks across part of the northern end of that part of the Mary Ann Bay, and via the Derwent River, looks towards Hobart city suburbs and Mount Wellington.

Not far away I walked past a pile of broken old convict bricks. 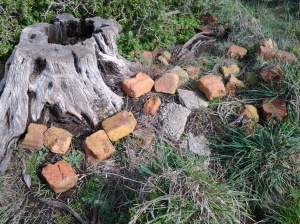 Gellibrand Point at the northern most point of the South Arm peninsula was the destination for Stage 2 of the walk.

I found the shape of this headland was blunt and rectangular so that there was no hint of a ‘point’. So it was a little difficult to say I had reached the exact spot representing the end of the second stage of my walk along the Derwent River edge. Across the watery opening into the large Ralph’s Bay I could see the goal for Stage 3 of the walk: Trywork Point. This headland is situated south of the suburb of Tranmere, and north of the South Arm peninsula.

In the photo above, you are looking at Trywork Point across the water.

The photo below was taken from my lunchtime vantage point looking across Ralph’s Bay towards the mound in the distance over the water on the left hand side; this is Trywork Point. 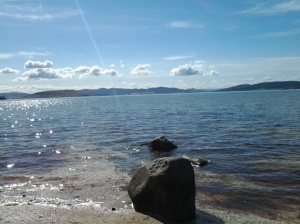 The Tasman Bridge, which provides the main city crossing between the eastern and western shores of Hobart, shimmered in the distance. Mt Wellington with spots in crevices of hard white ice left over from two or three weeks ago of heavy snow, was majestic.

I wandered along the headland until, between the track and a smattering of Casuarina trees near the water line, I spotted some sandstone boulders that looked perfect as resting spots; the first I had seen. By 11.15 I had rested, eaten a snack for morning tea, and set off again up to and onto the track that extends back to Opossum Bay via the eastern side of the peninsula.