Shortly after his arrival, in the 1820s William Gellibrand built a home using cedar with sandstone brick foundations, on Arm End. Marshall and Townsend claim the house was built in two parts consisting of nine rooms with stables located in the trees nearby (it is worth noting that the clearing of the land in this northern end of the peninsula was so thorough and complete that the numbers of trees could probably now be counted on two hands. Currently, the rolling hills are expanses of a variety of clumpy weeds. Open. Exposed. Desolate. The photo of weeds below was taken closer to the Communications tower however it is not atypical of other parts of this peninsula. Adding to the sense of barrenness is the frequent evidence of bandicoots digging across this large reserve. It is worth noting that a regeneration program is underway and so I would expect that the landscape will change its character in the coming years.) 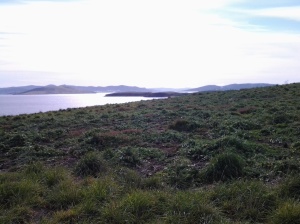 A visitor to William Gellibrand’s house, Miss Jane Mortimer recalled that every morning after breakfast, William went to dig his own burial vault located just below the house at the top of the dunes beneath She Oaks overlooking Mary Ann Bay. Apparently, he liked to spend sunny afternoons sitting on it and reading.

The land at Arm End remained in the Gellibrand family with the lease controlled by George Henry Blake Gellibrand who lived at ‘Terra Linna’. Young Christopher Calvert leased the land and lived in the house until he retired. There was an auction in 1914 of goods and chattels including animals. The homestead quickly fell into disrepair, was vandalised and eventually burnt down.

I almost missed seeing the vault as I strolled along the track. The saviour was an information sign installed above the bank at the northern end of Mary Ann Bay beach. The sign informed me that not only was William buried in the vault, but also interred were two of his grandsons who had been members of the Parliament – Thomas and Walter Gellibrand. William Gellibrand died ‘after an illness of acute pain and suffering which he bore with Christian submission and resignation’ on 27 September 1840 (almost exactly 174 years ago) aged 75.

The sign refers to comments by a Mrs Ruby who ‘described the vault as having three shelves of stone more likely collected from the shoreline of Ralph’s Bay’.

The vault is located close by and downhill from the sign. Visitors are urged not to walk down and further degrade the collapsing dune. Thanks to the local land care group, it was very easy to see the vault from near the sign at the top because the surrounding vegetation had been cleared over the edge.

I left this remarkable site at 10.50 am as I could hear the school children coming along the track for their own experience.