While eating my morning tea on the gentle slopes at Gellibrand Point, the children had moved ahead but it wasn’t long before I had covered the distance to arrive at the tail of their walking party.

The teacher and I struck up a conversation. I learned that this was a special outing for the South Arm School, and children had to be at least 8 years old to be eligible to join in the 3 or so hours of their planned walk. From anecdotes, this length of walk was deemed potentially a challenge for their children, by some parents.  In this day and age of technological gadgets and constant car use, perhaps walkers are an increasingly rare breed of person. But there were no grumbles from the children and they seemed all very happy to be walking along.

Just as I have my little project to walk the length of the Derwent River, I was reminded others have their wonderful special projects. The teacher surprised me when she explained that she and some friends had  set themselves the task of walking the 95 kilometres of all the Clarence City Council beaches (Clarence is one of the suburbs of greater Hobart – and the South Arm peninsula is part of that territory). Already they had covered 87 kilometres. What a great idea I enthused.  These are the simple pleasures that give real meaning to our lives.

It wasn’t long before a new geographical feature came into view within the smooth waters of Ralph’s Bay. The Spit.  A slim sandy piece of land that appeared as if the gods had yanked a slight sinew from the main land and pulled it out to a point. A large white cruiser rested languidly in the calm bay nearby.  No chance of sea sickness on that marine vehicle! 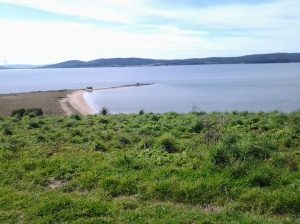 The children decided to take a path in that direction to discover what they might. We parted company and I continued along the 4 wheel driving track.

I circled around an old disused and collapsing quarry pit all the time enjoying the pleasure of putting one foot in front of the other. 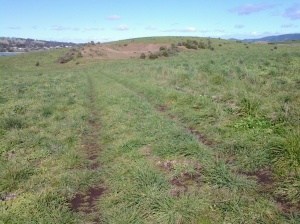 I passed corralling structures for holding sheep while watching circling hawks in hunting mode for small creatures on the ground.

And in a few minutes, there before me was the arc of Shelly Beach – too long to fit into the frame of a photograph. 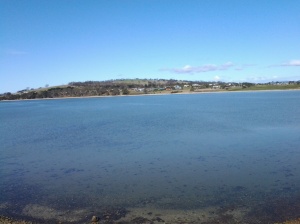