Browns River separates Tyndall Beach (below the Alum Cliffs) from Kingston Beach. On the Kingston side, a plaque remembers Robert Brown.

According to http://www.rampantscotland.com/placenames/placename_hobart.htm  the township of “Browns River was named after the noted Scottish botanist Robert Brown who explored the area a week after Hobart was founded. “  Apparently Hobart (Sullivans Cove) was established on 21 February 1804 (I shall remember the date because it is my birthday – well not the 1804 bit) and therefore before the end of February this ‘township’ of Browns River was in its infancy. A week – ye gods!  How quickly these pioneering settlers got around.  Nothing could happen so fast these days.  But, is the timing true or simply a legend? I don’t know.

The name was changed to Kingston in 1851 by the Governor of Van Diemens Land, Sir William Thomas Denison.  The website http://tasmaniaforeveryone.com/tasmanias-names-the-suburbs-of-hobart suggests “The name Kingston was advocated by the then Police Magistrate, Mr Lucas. Although his exact reason for deciding on the name of Kingston is unknown, there are many theories. His parents, Thomas and Anne Lucas, the district’s first settlers, lived at Norfolk Island before coming to Van Diemen’s Land and the capital of Norfolk Island was Kingston. Another possible reason is that Thomas was born in Surrey, England in a village close to New Kingston. It had been settled in 1808 by Thomas Lucas and his family, who were evacuated from Norfolk Island. He named his property ‘Kingston’, after the settlement on Norfolk Island. “

I finished my lunch on the south side of Browns River, crossed the pedestrian bridge over Browns River at 12.17 pm then proceeded along Osborne Esplanade (parallel and next to the Derwent River) towards the Kingston shops.  Over Christmas I holidayed in Kingston and my 3 posts titled I am on holiday watching over the Derwent River, Getting out into the air at Kingston Tasmania and Kingston Beach, Tasmania offer more information about this leg of my walk along the Derwent River.

I had the pleasure of meeting with Em for cups of tea and a long happy chat and saying hello to people I knew as they walked past the outdoor café Beachfront 32.  Immensely pleasant.

At 1.52 pm I restarted my walk southwards amidst foreshore joggers, walkers and seagulls – the sun was shining again and my world was warm.

By 1.59 pm I reached the Kingston Beach Sailing Club and could look back northwards across the sweep of water and the arc of Kingston’s white sandy beach.

The last photo looks north to the headland at the end of Tyndall Beach which was spread at the bottom of the southern end of the Alum Cliffs.

A minute later I reached the Boronia Beach Walking Track and turned left.

A gentle shady path meandered along above the water and I could hear happy voices on the rocks below.   The views through the trees were spectacular.

Up above me on my right were large houses with massive picture windows surrounded by high mesh fences. Then the landscape opened out and I could still look northwards to the Alum Cliffs where I had walked during the morning.

At 2.18 pm I reached a gate marking the entrance to the track down to Boronia Beach, a beach that I had previously not known existed. 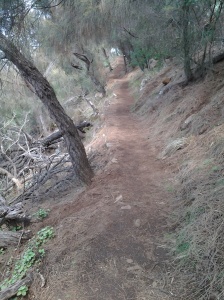 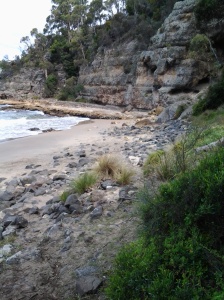 I remembered the chitons which had featured on a public art work at Taroona Beach and wondered whether they could be found on this beach (refer back to my posting Public art works along the Derwent River –Taroona’s Chiton for more information). I checked the rocks but found none.  I  concluded the chitons must collect together only on the Taroona Beach rocks.

The rock formations at the southern end of the beach were a surprise.  The soft sandstone has been weathered and small caves were formed into the cliff.

Seeing these caves cast my mind back to Kalambaka in north western Greece. Last year I visited this town and marvelled at the stunning beauties of the Meteora (refer http://en.wikipedia.org/wiki/Meteora for more information) Below is one of my photos showing the caves in some of the cliffs which hermits used to climb up and live in (and which Roger Moore as James Bond climbed over dramatically in the movie “For Your Eyes Only”). 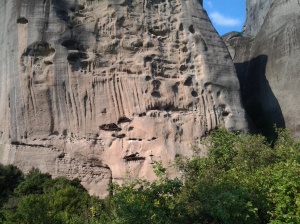 Boronia Beach’s caves are smaller and different in many ways from those of the Meteora.  However they surprised me in this tucked away gem of a beach.

For those who loved the photo of mussels growing on Boronia Beach rocks which I provided in an earlier posting about the Stage 12 walk, here is another.

Five or so minutes later I began the trek uphill out of Boronia Beach under old pine trees.

I was horrified to see thousands of escaped ‘forget me not’ plants, some flowering as they carpeted lots of the area near the beach and up the hill. I pulled out a few dozen and their roots came out easily but a concerted effort of a few days’ work to remove these before they spread any further is essential if the wild bush is to stay as pure as it can.

A gate half way up the hill let me out onto a continuing walking track at 2.36pm.  Not long after I decided to sit on the steep steps and smell, look and listen to the environment. Very peaceful.

By 2.45pm  I was walking again and a couple of minutes later I reached a gate to exit the entire walking track area. 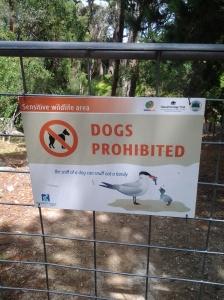 The entry was signed but, while the exit was easy, it was entirely unclear whether to turn left or right.  At the end of the dirt road in both directions I could see gates closed over the road.  Murphy’s Law has it that I will often make the wrong choice and it was no different at that point. I chose to walk down to the gate at the bottom of the road but found it entered into private property. Back up the road, lined one side with large girthed pine trees, I walked to the other gate and found no obstacle to walk around it. At 2.54 pm, I was continuing along the road watching a family of magpies fossicking in an open paddock, and later marvelling at an old crab apple and a pear tree both of which were laden with fruit.

At 3 pm I arrived at the junction with Kingston and Blackmans Bay’s main linking road, Roslyn Avenue.  The address for the dirt road on which I had been walking is Roslyn Ave 82-88, and it is directly across from Jindabyne St over the roundabout on Roslyn Ave.  One corner of the intersection is occupied by the Catholic Church of Christ the Priest and the Aloysius Primary School.

I found a tiny laneway, squeezed between residential properties, which extended from Roslyn Avenue near where I was staying in Kingston, down to Kingston Beach.  The downward stroll took 6 minutes and, later, the return trundle uphill took 10 minutes.  The easy accessibility to the beautiful foreshore is an asset for locals.  I loved the closeness of the lush vegetation along the pathway and then the openness of the Beach extending before me once I reached the Esplanade.

The morning was overcast with a moderate breeze, but the weather did not deter families, groups of children or a kayaker from enjoying the beach and water.

In the photo below the lone kayaker sets off to enjoy a paddle. The land which can be seen across the Derwent River is the South Arm peninsula. Standing on Kingston Beach, I could identify key points along that piece of land which I had walked during Stage 1 and 2: Gellibrand Point, Opossum Bay, South Arm, and Fort Direction Hill.

I followed a path along the foreshore northwards to Browns River and then I retraced my steps. Looking towards the mouth of Browns River as it enters the Derwent River.

At Browns River, one side of Mount Wellington looms in the distance.

Kingston Beach and Browns River are located within the municipality of Kingborough as part of the Greater Hobart Area. In the photo below the waters of Browns River can be seen meeting the Derwent River.

Nearby I discovered a plaque (photo below) and its message surprised me. Browns River was named in 1804 (you can read more about Robert Brown at https://www.forestrytas.com.au/assets/0000/0185/tasfor_12_10.pdf).  From the reports of my earlier walks in this blog, you might recall that Risdon Cove was established as the first white/non indigenous settlement (on the eastern shore, and quite a few kilometres upstream from the mouth of the Derwent River) in September 1803. I find it quite extraordinary that within months of the first white settlement (in fact Brown named the River in April 1804), despite the difficulties of making a new home in this foreign land, new arrivals were off and about checking and naming other edges of the Derwent River. It wasn’t until July 1804 that the area around Sullivans Cove (the site for the central part of the current city of Hobart) was set up for permanent residency. Sullivans Cove is much much closer to Browns River than Risdon Cove, so Brown had a long way to paddle.

The photo below looks back towards the centre of Kingston Beach from the Browns River northern end. 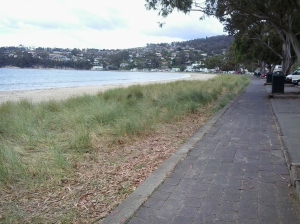 I loved the trees and was especially impressed by one of the flowering gum trees next to the foreshore walkway.

The stroll from the one end of Kingston Beach to the other takes about 15-20 minutes and represents approximately 1 kilometre of the Derwent River’s length.  Immensely pleasant.  If you haven’t enjoyed this part of the Greater Hobart Area, or it’s a while since you have travelled here, then I strongly recommend you make a visit.

Fish and chip shops, cafes, a sad looking motel and Duncan’s Beachfront Motel Hotel are located across from the beach.  Some readers might know Slim Dusty’s song ‘I’d like to have a drink with Duncan’ (refer to http://www.lyrics007.com/Slim%20Dusty%20Lyrics/Duncan%20Lyrics.html for more information). Jo will recall the hilarious fiasco at a fashion parade in Darwin when this music coincided with a bridal dress being shown on the cat walk.  I wonder who Kingston’s pub is named after? Anyone know? 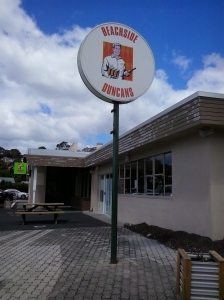 Along the street travelling away from the beach towards Hobart, you will pass an assortment of outlets including hair salons, service stations, a community hall and, very surprisingly, the Wafu Works which is a shop selling vintage authentic Japanese fabrics.

Simple street art in the form of inset mosaic panels have been incorporated in the pavements.

This part of Greater Hobart is very attractive, and I am vowing to visit more often.