My walk started well with the Tassie Link bus depositing me on the Lyell Highway at the junction with Butlers Gorge Road, a very isolated spot.  The day was overcast and sufficiently cool to make for extremely comfortable walking.

Instead of following Butlers Gorge Road I walked over to Tarraleah Canal number 1 and was stunned.  It contained no running water and green slime was growing at the bottom in sections.

A question pounded through my brain – where was ‘my’ Derwent River?  I was annoyed.  I was two hours’ drive from Hobart and returning home was not an option. I was here to walk my ‘choice’ of the Derwent River, yet no water flowed.  I humphed and sighed and decided to walk beside the Canal to Clark Dam despite the absence of water, and that would be my story.

Years ago Tasmania decided to sell its clean electricity supplies into the national grid and in tough times to buy in essential electricity supplies.  So an underwater pipe was built beneath Bass Strait, which separates Tasmania from mainland Australia.  In recent months the connection has failed, the Bass Link is yet to be repaired and our state has been unable to acquire additional electricity to meet our needs in the foreseeable future. Meanwhile with low water levels in our Hydro Tasmania dams, our local electricity supplies are in danger of being exhausted.  Therefore, when I saw the empty Tarraleah Canal number 1 I jumped to the conclusion that the water from Lake King William had been turned off; I thought this was a sign of our increasingly dire situation.  Later (and in a later post I will explain) I learned I was wrong.  The empty Canal had nothing to do with the Bass Link failure.

As later posts will indicate, even when empty this Canal is dangerous and should never be entered.

Blog reader Ma reminded me of the Flax Lily, a native plant well known to indigenous Australians – the Tasmanian Flax Lily is the Dianella tasmanica.  The purple flower petals spread around glowing yellow stamens and are very distinctive when you come across them in the bush. The resulting fruit are glossy purple berries.  The photos below come from https://www.anbg.gov.au/gnp/interns-2009/dianella-tasmanica.html 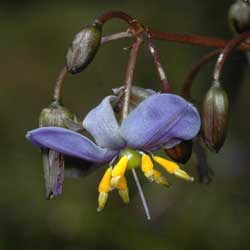 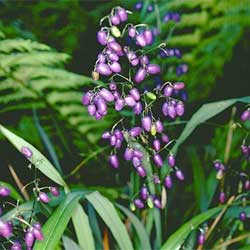 Apparently the berries of mainland Australia’s varieties are edible and taste something like grapes, and can be made into jam.  When walking, I have simply admired their colourful occasional presence in native bushland whenever I have seen them.

Tasmania has an additional plant with brilliant purple berries.  It is the Billardiera Longiflora otherwise known as the Mountain Blue Berry or Mountain Berry. The photo below is taken from http://www.wildseedtasmania.com.au/climber.php

The same site indicates these berries are edible. I have passed these berries many times when walking in the bush but I have never picked or eaten any.  I rather like the idea of leaving the bush as I find it.

The Outlaw Gardener at http://outlawgarden.blogspot.com.au/2013/08/billardiera-longiflora-my-favorite.html presents a range of stunning photos of the Mountain Berry.

On a recent afternoon I could see the Marina cruise ship berthed at MAC2/3 (the name of one of Hobart piers). This ship arrived early in the morning from Geelong in southern Victoria on mainland Australia. 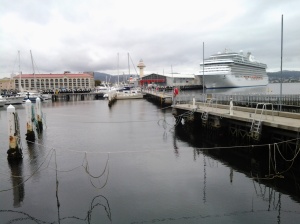 For more information about the ship go to http://www.cruiseaway.com.au/ship/marina?gclid=Cj0KEQiA6ounBRCq0LKBjKGgysEBEiQAZmpvAxP6_HcT_3xcTvA4bqjanWX6gz9rMqc1ga4ZVAGuCFoaAiMt8P8HAQ

Later, I watched the Marina depart at 6pm.  The early evening sun sparkled across the Derwent River and brightened the ship so it made a spectacle as it gathered steam. The Marina’s next destination is Milford Sound on the south island of New Zealand.

This cruise ship is one of many which dock in Hobart and release thousands of tourists across the city and further beyond, for day trips. If you want to know which ships  are due in port in the coming days then read http://www.tasports.com.au/port_services/arrivalshobart.html

The overall cruise ship schedule into Tasmanian ports can be read at http://www.tasports.com.au/port_services/arrivalscruise.html. This list is staggering because it shows the bookings up until 2020!

From my Bellerive home I can see these large ‘towns’ on water as they arrive and depart.  I can almost feel the thrill that I expect new arrivals might experience as they reach this new destination ready to discover a new world.  One day I hope one of my blog followers will be on such a cruise ship and will ask me to take them on a walk somewhere along the Derwent River.