Leaving Lutana, I crossed the bridge on the Queens Walk by turning left off Risdon Road.

Close by was a sign indicating I was now in the City of Hobart and part of the New Town Bay Reserve. I turned left into Marine Esplanade.  A massive Graham Family Funeral direction sign sat in a rugby field on one corner implying a funeral business was behind.  But it is not – the business premises are located perhaps a kilometre or more away within the suburb of New Town.

As I walked along the gum tree sided Esplanade with New Town Creek to my left, I inhaled deeply of the fresh eucalypt smells. A little before 1.15pm I reached the Tasmanian Bridge Association clubhouse. A minute or so later I passed a University of Tasmania building and stood on a landscaped circle of land marking the mouth of New Town Creek as it enters into New Town Bay.

Continuing amidst trees by the water’s edge I walked outside a high mesh fence marking the territory of a Sewage Treatment Plant.

A little after 1.20pm, I was forced to turn back and retrace my steps. The property on which the oil tanks stand was effectively fenced, and the barb wire topped mesh extended out into the water. I wasn’t welcome to continue.

Irritated, I plopped down on some rocks at the edge of the Bay and nibbled on some lunch. 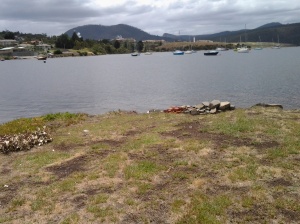 For the first time that day I felt the effects of a strengthening wind. I liked watching the MONA ferry dragging a chain of churning white water like a fluffy tail, as it travelled between Hobart and Berriedale.

This route was a pleasant and safe distraction but it did not help me to reach Selfs Point.  And then, as I walked back I found there were no connecting pathways between the Esplanade and Selfs Point Road. But I was not unhappy to have walked this way.  It was really tranquil moving along beside the edge of the Creek and then New Town Bay and the return walk.

In addition, the deviation was valuable because it allowed me to muse about the walkings of Charles Darwin, the English naturalist and geologist best known for his contributions to evolutionary theory. Darwin sailed to Hobart on the Beagle at the end of January 1836 and departed in the middle of February.  You can read more information about his Tasmanian stop over and his opinions at http://www.utas.edu.au/library/exhibitions/darwin/hobart.html.  A few years ago I was told that Darwin decided to climb Mount Wellington by starting at New Town Bay and following New Town Creek.  However, I can find no evidence of this and, in fact, the Royal Society of Tasmania states Darwin only made two attempts to scale Mount Wellington and both were from the South Hobart direction.

By 1.45pm, I had returned to the Queens Walk and turned left to find another route to Selfs Point.