On Stage 10 when I walked to the Hobart Regatta Grounds after passing under the Tasman Bridge on Stage, I stopped to have a look at the cluster of old white painted buildings, which had started their lives as a navy depot. 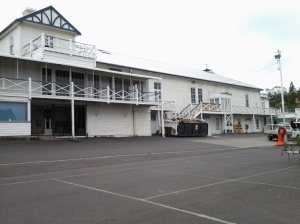 These buildings, now known as Huon Quays, have been sold to Tasports.  Read more about it at: http://www.themercury.com.au/lifestyle/tasports-snaps-up-prime-huon-quays-waterfront-site/story-fnj64ocs-1227202042732 I wait with interest to see how this heritage site will be developed.  I hope the development will be sympathetic to its history and the surrounding environment.

Leaving the navy depot on the edge of the Derwent River, I realised the distance to Hunter St and the beginning of Sullivans Cove in Hobart was not far.  That seemed like a perfect finishing destination for Stage 10 of my walk along the Derwent River, so onwards I plodded.

The ex-navy depot sits immediately next to the Regatta Grounds so I reached the Regatta Stand, set up for the annual audiences, very quickly – by 4.10pm. 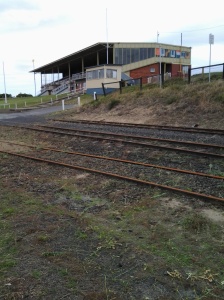 Hobart’s Regatta has a long history.  According to http://www.soldierswalk.org.au/walk_domain.html , “The Hobart Regatta is the nation’s second oldest and commenced in 1838 and has been staged every year since, bar two. A grandstand was built in 1877 and replaced by the John Colvin Stand in 1919-20.”  History and photos (including some of Queen Elizabeth visiting) can be seen at http://www.royalhobartregatta.com/History.html.

The day had become bleak and windswept. The area was empty of people and movement. Nevertheless, I continued walking along the dismal disused railway line and passed empty wood chopping competition blocks. 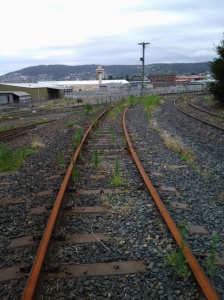 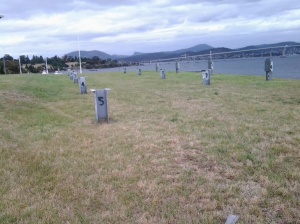 Eventually I was stopped from walking to Macquarie Point on the Derwent River by a high fence with locked gates.  I did my best to continue walking around and as far as I could. But it was useless to think I could get much closer to the Point.  It simply was not accessible to walkers like me. 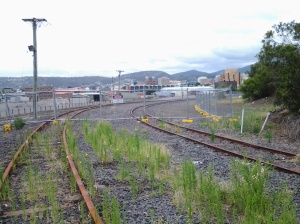 I clambered up a weedy section and eventually climbed over a lower fence until I was standing on the lower grounds of the Cenotaph, a monument commemorating the men and women who have died in various wars. This is a significant site in Hobart on our nationally celebrated ANZAC Day each April 25th. As I began to leave, the time was 4.18pm. 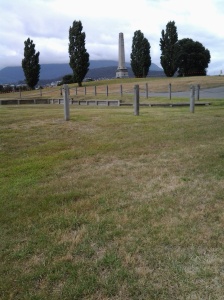 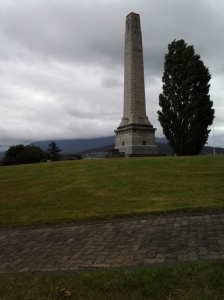 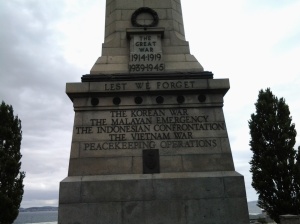 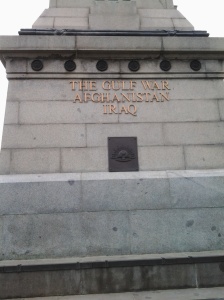 I walked around the Cenotaph, 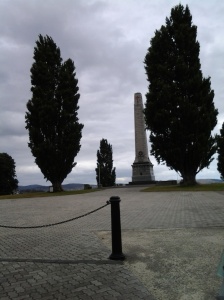 down an avenue onto the Highway opposite the Aquatic Centre, then turned left and continued until I reached the Grand Chancellor Hotel, which sits opposite the end of Hunter St, at 4.38pm.  A bus stop was nearby and within moments I was on a bus travelling back to the eastern shore to my home in Bellerive.  I felt like I was glowing from the achievement of having covered so much territory and history during this Stage 10 of my walk along the Derwent River. It had been a marvellous day!