Recently a friend sent me a link to an extraordinary 9 minute film that was made in 1958. The film is based around New Norfolk, a town located approximately 35 kms west of Hobart. The Derwent River bends around the edges of the rural town that is now built up on both sides of the river.

Enjoy watching the film ‘Valley of the Derwent’, produced by the Tasmanian government, here. Please bear with the excruciating sound of the music so you can listen to the 1950s style narration. The images start at Granton about 18 kilometres west of Hobart. The voice-over explains the original virgin bush ‘had never known the axe or the plough’ indicating a firm belief in the 1950s that taming the wilderness (a euphemism for ‘removing the bush’) was what humans should do. Regrettably there are still too many people (including governments) who feel similarly in 2020.

Early on you see the black swans on the river. David Walsh owner of MONA has just released a diary entry where he refers to the black swan as the unknown unknowns. Makes for interesting reading – here.

I was fascinated that a composer William Wallace, according to the film,  wrote the opera “The Spirit of the Valley” while he stayed at the historic Bush Inn in New Norfolk. It led me on a merry chase through archives and online resources. However recent academic research indicates this is a myth generated over the years, and that even the writing of one song for an opera while he visited New Norfolk is unlikely.

For long term blog followers, the filmed section on the oast houses may bring back to memory my fascination with those at Bushy Park when I ‘discovered’ the texts on the buildings as I walked west from New Norfolk. Refer here.

It made me think how many years have passed and what a world of difference there is since the film was made. For example, I was six years old when the film was produced yet I noted the clothes being worn have the familiar shapes of those of my life through the 1960s.

‘But it’s the river that captivates the eye, twisting and turning along the valley’, so says the narrator. I would say this was true for the entire 213 or so kilometres of the length of the Derwent River.

Suddenly, I was on the outskirts of the tiny town of Bushy Park and hop fields began to edge the road.  In case you don’t know, hops are the raw material for beer so the agricultural activity in this area is serious business. In Tasmania we have two mainstream brewers; the Cascade and Boags breweries plus other interesting boutique beer makers. 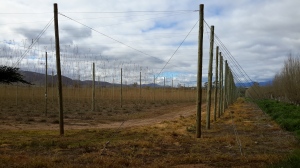 The Beer Pilgrim  has lots of photographic information to offer. An ABC news item includes photos of the hops and some processes. In addition, information about the growing patterns of hops, their harvests and other details are located at Hop Products Australia abbreviated to HPA.   I was fascinated when I read ‘The hop plant originated in China, but it was the Germans – way back in the 11th century – who first discovered the crop’s potential as an ingredient for beer, and they’ve been at it ever since.’ I wondered whether the world would be a different place if the Chinese had made that discovery first.  What would be the Chinese equivalent of an Oktoberfest? 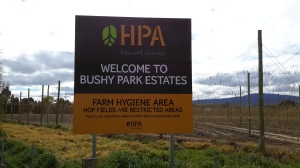 When I read the sign in the photo above, I felt good that I hadn’t found a way to walk on the river edge on the other side of these hop fields – if I had, then the soles of my shoes might have delivered exotic seeds or destructive pests to the ground.

As I continued walking, I enjoyed looking at properties and different vintages of houses. 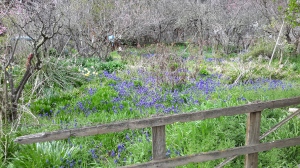 The hop vines were not yet growing up the lines so the views across the paddocks were relatively uninterrupted. Before long, across a hop field I could see specialised hop buildings near private houses. 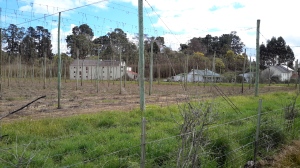 Then, as I reached 1 Acre Lane, at the far end I could see Oast Houses and other large buildings.  In the Google Map photo below the hops have grown up the vines on the left and they obliterate the views I had over the empty paddocks – but this is the lane if you are visiting Bushy Park and looking for what I could see. On the street view of Google maps no sign naming the lane is in evidence, but since that street view was made a sign has been attached to a pole on the non-lane side of the road.

My feet were aching and touchy at each step. I wondered whether I had it in me to walk down the lane to see whether there was public access and have a look around, and then have the feet to walk back to the road.  I still had quite a few kilometres to go to reach my day’s destination at Gretna and I felt rationing my steps could be a good idea.

Just then an old woman, on the main road, was dragging two large empty rubbish wheelie bins towards me and the lane.  A tiny lady, I felt she could have fitted inside one of these.  It looked like a massive effort for her. She was pleased to rest and chat with me. I asked if public access was available and she told me that I could look around the buildings but not in them, and that most were heritage buildings and no longer operational. She headed off down that very lane. That long lane.  After she had taken a few steps she stopped for a rest. I realised this was a weekly challenge for her after the rubbish had been collected. I had no idea how far she had to walk with the bins, and since I could not see any residential houses I guessed that somewhere at the end of the lane in the precinct with the Oast Houses and other specialist hop buildings, she had a house. I called out ‘Can I give you a hand and take one of them?’  She didn’t have the energy to look grateful and simply said, ‘Yes’.