Walking from Cornelian Bay towards the city of Hobart and under the Tasman Bridge was something I had not done for a few years. In the past I could see signs of homeless people using areas under the bridge but not this time. I had a sense that some sort of industrial bridge work was in progress and that the authorities would be around and about here frequently.

From the Tasman Bridge into the city I remained on the bike path where I was continually vigilant for cyclists riding fast and hard – to help them and to help myself, I stayed firmly to the left of the path so they could whip by.

I looked over Ross Bay and across the Derwent River to the shores of previously walked suburbs such as Montagu Bay and Rosny. 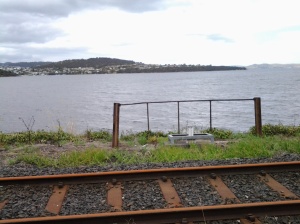 I looked down the river and could vaguely see the isthmus joining the South Arm peninsula to the mainland of Tasmania; an area where I walked during Stage 1 and 2 of my walk along the Derwent River. 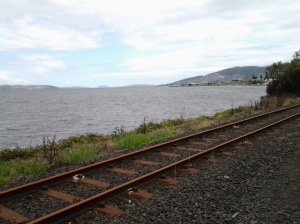 I continued along the bike path heading towards the old navy depot near the Hobart Regatta Grounds.

I passed two large tug boats resting at their berths.

It did not seem to take a long time and much walking before I could look back and see the Tasman Bridge was growing considerably smaller again.

Uphill on my right, occasionally through the trees I could glimpse parts of the 19th century sandstone block Government House.  Further information about the House can be read at http://www.govhouse.tas.gov.au/. The flag was flying high indicating the Governor was in residence.

Tasmania’s new Governor is our first female Governor. Her Excellency Professor The Honourable Kate Warner AM, Governor of Tasmania was sworn into service on 9 December 2014.

At 3.55pm I had arrived at McVilly Drive which crossed my path. On the rise to my right, grandiose circus tents filled my view and I could hear a performance was underway with the booming voice of a ringmaster surrounded by pumping pop music.

I discovered a family of powerful Clydesdale horses corralled by electric wire fences and comfortably grazing on the lawns around the other side of the circus. 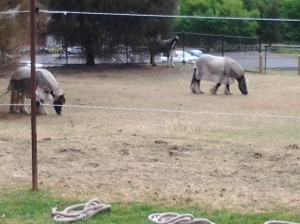 A different boom startled me. I realised a large ship somewhere close was blowing its ‘trumpet’. I was close to the main Hobart port. A seaplane flew overhead presumably with a load of tourists enjoying the view.

I turned left at McVilly Drive and instead of walking down to the water where I could see there would be no further access southwards, I chose to walk to the right along the metal sleepers of the disused railway line behind a cluster of old white painted buildings, which had started their lives as a navy depot.  Once past the back of the old buildings I walked downhill, watched a cluster of fishermen not yet catching any fish, and turned left and walked northwards along a road leading to an entrance to the navy depot.

Currently known as Huon Quays and located at 17 McVilly Drive, Hobart, you can refer to photographs at http://www.realcommercial.com.au/property-land+development-tas-hobart-501343663 and see that this set of old buildings could be sold for a hotel development.  First built in 1914 as a naval depot, the building includes a ‘Drill Hall’ (major function centre) ‘Club Huon’ (19 rooms for backpackers), ‘Commandants House’ (residence, bar and lounge) plus offices, amenities block, store rooms and night quarters. Originally this was the home port for the navy ship HMAS Huon and the drill hall was constructed for navel cadets.  According to http://www.soldierswalk.org.au/walk_domain.html, the site “served as an important training centre and home dock for a number of small naval vessels until the base was de-commissioned in 1994. The oldest remaining buildings date from 1912-13.”

What I saw on my walk was:

I realise that with increased visitor numbers to Tasmania, accommodation can be difficult to find at times of festivals, special concerts and important sporting events, and that therefore Hobart needs more hotels. However the thought of this rather pretty building being demolished to make way for a less interesting building worries me.  But perhaps the new owners might create something in keeping with the site’s heritage. I will watch with interest.  I left at 4.07pm to continue my walk.