This stage of my walk along the Derwent from the mouth of the River on the eastern shore was the most exciting one so far, because I was reaching a significant milestone.  By my reckoning, it marked the end of the easiest part of the walk to the source of the Derwent River at Lake St Clair. Accordingly, and to continue a walk with relative ease for a while, I planned to cross the Bridgewater Bridge and walk south to the mouth of the River on the western shore, then to start tackling the challenging kilometres further north next year.

I was a little surprised how special the day seemed, and so it was an easy decision to cross the Bridge rather than waiting to do so on Stage 9. 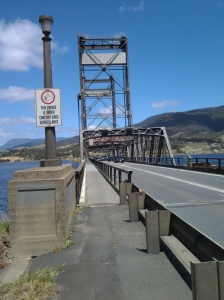 I stepped onto the path on the left of the Bridge at 1.14pm and was off the Bridge and onto the Bridgewater Causeway by 1.20pm. The terrifyingly large fast trucks threatened to suck me off the bridge with their speeding surges next to my shoulder (there was a metal fence separating us but the bridge noise and vehicle speed all combined to make the energy around me vibrate fiercely). I removed my sunhat and held on firmly. 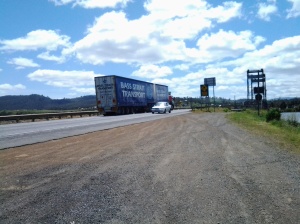 Except for a small layby, there was no formal walking track beside the Highway on the Causeway, and trying to walk on extremely unsafe and uneven ground beside railings (or none) required extra vigilance.

Looking ahead of the western shore, from the Bridgewater Causeway.

The persistently noisy and fast traffic (on what must be one of Tasmania’s busiest roads – the Midlands Highway) and the wind pushing across the Causeway from one side of the Derwent River to the other were constants, and I was determined they would not distract me from getting to the western shore. I was not the only one walking across the causeway; two others were following me across.  So, on the sample of three people, I would say 100% of people experience danger walking across the Bridgewater Causeway.  I didn’t take photos of the really dreadful bits – too busy concentrating on where my feet might go.

I did enjoy watching the dozens and dozens of Black Swans, and looking back at part of the suburb of Bridgewater on the eastern shore. 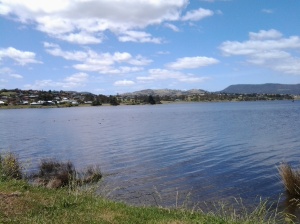 And towards the western shore: 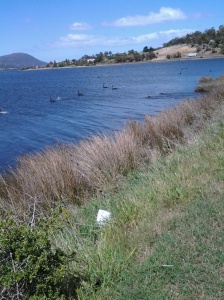 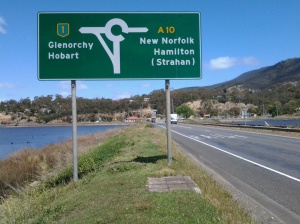 I reached Granton on the western shore at 1.35pm and negotiated myself along the road and across old train lines (this would all be easy if there was no or minimal traffic) all the time beginning to move southwards. Three minutes later I reached the sign indicating a left turn off the Brooker Highway towards Granton South and Austins Ferry.

As I stepped in this direction I recognised a sign marking the start of the City of Glenorchy.

Occasionally I looked back towards the Bridgwater Bridge, across the railway line that was one a lively link between northern and southern Tasmania. 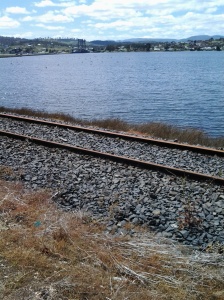 I followed a rough non-path on the edge of the road until a new sign at 1.45pm indicated I needed to take another left turn towards Granton South and Austins Ferry.

As I walked around the corner, on the right in the distance I could see a hotel; the York Hotel.

I felt myself glow with delight in anticipation of making this my stopping point for the walk, enjoying a cold beer and meeting the locals. However, as I got closer, two locals were walking towards the bus stop Number 47 located opposite the Hotel.  They let me know that a bus was expected in the next few minutes. My feet hurt, it would be quite a while before another bus would pass this way, and so I decided to forego the pleasures of the pub and start my bus trip home. The locals led me to believe the publican ‘has done a really good job’ and ‘this is a good pub now’.  So, perhaps with friends in the future, I will venture back here for the missed cold one.

I was on the bus at 1.57pm, reached the Glenorchy Bus Mall at 2.15, and caught the Metro bus 694 via Risdon Vale to the Eastlands Shopping Centre at Rosny when it left around 2.30pm.  Most of all I was surprised how long it took the bus from the York Hotel to Glenorchy – almost 20 minutes. That represents a great deal of walking time so it is difficult for me to guess where I can reach on the next Stage 9 of my walk along the Derwent River. I am guessing that somewhere in the suburb of Claremont might be achievable, but who knows! Finding out is what gives me something to look forward to next week when I tackle Stage 9 of my walk.