Instead, I left home at 6.45am (way too early for my liking but no other choice), passed three Black Cockatoos feasting on a native tree in a private home (one acted as a sentry high up while the others gorged themselves), walked to the Eastlands bus mall and caught the first bus through to the bus mall in Elizabeth St in Hobart’s CBD. At 7.17am the X1 express bus to Glenorchy in the northern suburbs of the Greater Hobart Area (and beyond) departed. This arrived at 7.35am at the Glenorchy bus mall and, anticipating public toilets would be non-existent for my walk, I walked over to the Northgate shopping centre to use their facilities. I was back at the bus mall in time to catch Metro bus 126 to Old Beach which departed at 8am. At 8.20am I stepped off the bus ready for the day.

The sky was overcast and I was wearing a thermal top over my T-shirt and topped with a fleece jacket.  Blowy. Hard air hitting my face.

Since there was no direct water access from the jetty northwards, I walked through the suburban streets staying on the hard concrete footpaths. Plovers and Blackbirds were my constant companions and extravagant blooming roses and wattles perfumed the air. It was rubbish removal day and the streets were lined with bulging large faded red wheelie bins and yellow lidded green bins. The wind had lifted many lids and these were thrown back as if saluting when on parade (a vision that friend Jo exclaimed he saw).

At 8.33am I reached the intersection with the East Derwent Highway and lost a footpath. I turned left and walked beside the highway where it was obvious a few other people had walked but there was no formal pathway. At this point I could see the water of the Derwent River but I was not close. It was clear that property owners had fenced and gated off any access to the River and I need to determine whether they had the right to do this in all cases.  I continued on the Highway noticing the signpost to the Bonorong Wildlife Park and Compton Agistment Centre marking the turn off from the highway away from the River.

Not much further along I saw a track between new houses on the left and followed it then through the grassy bushland but, as lovely as it was, it was impassable offering no easy way to the River and so I had to retrace my steps. At 8.54am I was back on the Highway walking to the left of the guard rails (so that I wasn’t directly on the Highway) on rolling gravel where a path was never intended.  Then the guard rail disappeared so I walked carefully as far off the road on the narrow verge as I could.  Sometimes I walked in the ditch. By 8.58am I was passing Compton Road and at 9.01 I reached Clarrie’s Creek. I began to disrobe as the morning and the exercise began to warm me: off came my thermal top.

The perfume from the flowering wattle trees was invasive and pervasive in the nicest way.  Please feel free to use any of the photos below as a screen saver. I have.

Continuing along the Highway, I walked up an incline until I could turn left on a bitumen roadway. This was blocked by a gate, but there was walking space around this, used by others. I had reached the newest part of Old Beach on its own rounded headland. Once past the gate I turned left towards the Verve Village site office signs and walked on. Through the mesh fence to my right I could see the Verve café, not open. The time was 9.10am.

Not long afterwards I was snapping photos of the low mountains and hills across the Derwent River on the western shore. Grandly beautiful in a simple way.

This ‘roadway’ eventually ended at a locked gate but again a regularly padded informal path was clearly visible around the obstacle.  I turned left and 100 metres along, a yellow gravel path appeared. The path had no sign but I hoped it was a foreshore trail and followed it. It was.  A trail with almost no signs of animal life except a massive black furry feral cat bounding away and a sole man out for exercise.  Crows carrhh carrhh carrhhed in the distance and overhead. Casuarina trees edged the path and through them the woodland was open and airy. Water lapped onto the shore. Mudstone rocks edged out of the soil on the banks. I enjoyed a flash of colour when I noticed yellow and orange flowering nasturtiums that had escaped from a suburban garden into the bush.

The photos below show a view southwards to the River from the first 100 metres of the path.

The foreshore trail was easy to follow, wide and clear. 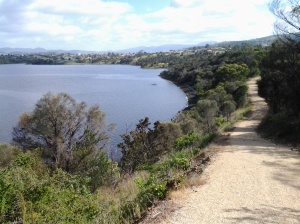 At 9.36am I reached the point where the Derwent River and Gage Cove met.

The trail curved into the Cove but not before a man-made construction, to the right of the path, seemed to flush deep below and then a dreadful stink followed. I tried not to think what was going on there.

By 9.42am I was walking up into the suburb having enjoyed watching black swans floating around in the Cove, and a few minutes later I reached a gate which, as usual, I walked around.  I turned left and followed the road from the cul de sac amidst the noise of every neighbourhood dog barking to indicate a stranger was nearby.  Me.

At 9.45am I turned left at the T junction and by 9.48am I reached the intersection of Stanfield Drive with the East Derwent Highway.  Continuing on I could look down in Gage Cove with its coating of red algae or some other red plant.

So far my morning had gone well and I was enjoying myself. Also, I was pleased that I had finished passing through all parts of the suburb of Old Beach and was ready for the next suburb.