Previous posts have explained the route I walked and the bus services that supported my walk from Rosny Point to Geilston Bay last Friday. This and a further couple of posts will provide colour and texture to those bones.

Once off the bus around 9.20am, I walked through a light open forest of wattle, gum, casuarina and other trees and could see snippets of calm Kangaroo Bay to my left. The photo below looks across the Bay to Bellerive Bluff which was the official finish point of Stage 4 of the walk. The suburb of Tranmere with Droughty Hill above, appears in the misty distance (the location of Stage 3 of my walk).

The beautiful Bay seemed like murmuring silk. Almost no breeze. The whoosh of cars on distant roads seemed oddly out of time and place.

The Clarence Foreshore Trail passes the inaccessible Rosny Wastewater Treatment Plant on the left.  From the Trail, occasionally rough gravel tracks led down making it possible to reach the water’s edge and I could see Dominican Gulls on the rocks and the occasional Pied Cormorant. Around 15 minutes after leaving the bus I reached the Rosny Point curve where the land left Kangaroo Bay and moved around to edge the Derwent River.  A few minutes later, a Trail sign indicated the Tasman Bridge was 1.7 kilometres further on. I was thankful for the Trail because the narrow rocky shore was strewn with sharp broken oyster shells; later on I watched a family of Pied Oyster Catchers preening and resting – obviously they had eaten their fill.

A few days ago I posted the story that the ‘navy had come to town’. The photo below looks across the River from a place between Rosny Point and Montagu Bay and shows the grey green HMAS Arunta to the left of the orange Aurora Australis Antarctic icebreaker. Oh, and by the way, I discovered the Commander of this naval ship was once responsible for the HMAS Derwent. 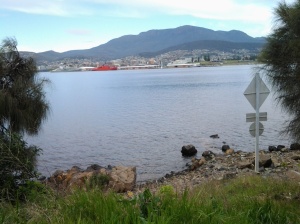 Close to 10am, I reached the Derwent River corner of Montagu Bay.  Harsh sounds filled the air; very vocal wattle birds and the growling of power brakes used by large trucks on the Tasman Bridge. From here, I had the choice to walk 200 metres up to the Rosny Hill Lookout. However, I continued on towards the heart of Montagu Bay past a clutter of upturned dinghies partly hidden in the bushes by the shore. By 10.05am, I was out of the forest and soon passing Langdon’s Welding shop on the left with workers out repairing some boats. By the Trail, I noted a large nectarine tree filled with the start of new fruit and made a mental note to walk this way in December when the fruit should be ripe.

At Montagu Bay I was stopped by an elegant contemporary public sculpture (unknown artist) which I did not know existed.  Well worth a visit. This was the Memorial to those who lost their lives when the Tasman Bridge crashed in 1975. Have a look at the photo below.

The idea is that you look through these circles to pin point the part of the bridge which collapsed.  An information board provided additional information on this tragedy. 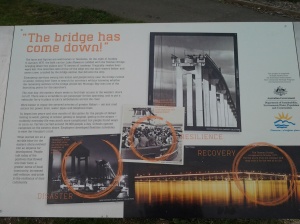 The view across the Derwent from Montagu Bay was magnificent. 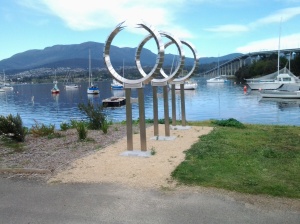 Public Toilets are located near the Montagu Bay Reserve parkland area. This area is one of many that are child friendly with kids play equipment for free use. 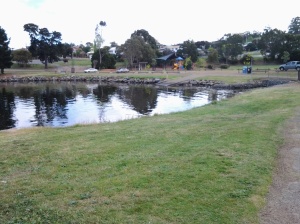 300 metres along the Clarence Foreshore Trail after passing huge old pine trees, massive gums with fanciful ‘painted’ bark trunks, then the Montagu Bay Primary School on the right, I reached the Tasman Bridge which I walked beneath to continue towards Rose Bay. The time was 10.20am.

1 thought on “What did I see on the walk along the Derwent River from Rosny to the Tasman Bridge last Friday?”