Yesterday I had the pleasure of sailing around the Derwent River Harbour in a full scale replica of the Lady Nelson sailing ship.  The original was built in 1798 in England and plied the waters between Newcastle and Norfolk Island and Tasmania for the next  twenty five years.  My day on the water was glorious with blue skies, golden sunshine and a firm breeze. When all the sails went up, we scudded along at 7 knots.  Quite wonderful. The image below is of the replica in which I sailed.

The water surface had an almost millpond quality as we returned to the wharf. I couldn’t imagine how sailing ships would cope with heavy seas.

I spent a great deal of time thinking about earlier sailing ships and I tried to imagine what it might have been like, with so many ropes and so many sails being part of the picture for months at sea.

The Lady Nelson came out to Australia with around 20 people. The original crew size was 12.

Records show that at times there were perhaps 60 or more people sailing for days on the Lady Nelson.  Yesterday with passengers and crew I suspect our number was around 40. It was standing room only on the deck when all were assembled. Sailing for days would have been very cramped and most uncomfortable by today’s standards (although I recognise that people were generally physically smaller back then than we are today). Add to that, on the original Lady Nelson, the area below deck remained unstructured with one open hold. Apparently people slept on boxes and ropes and all.

My photos below give some idea of the majesty of a sailing ship however small (and it also shows how glorious it is to be out on the Derwent River in Hobart). 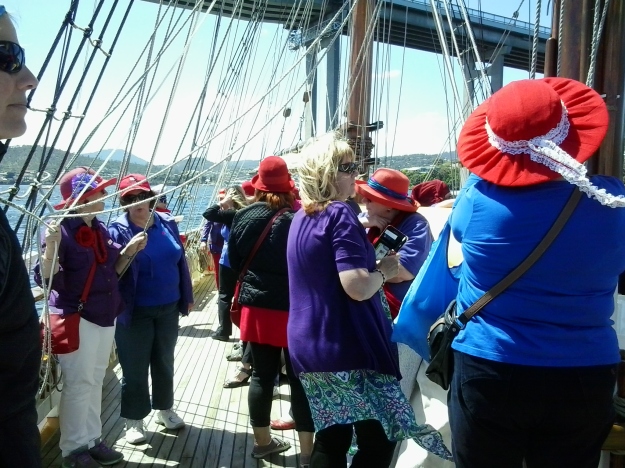 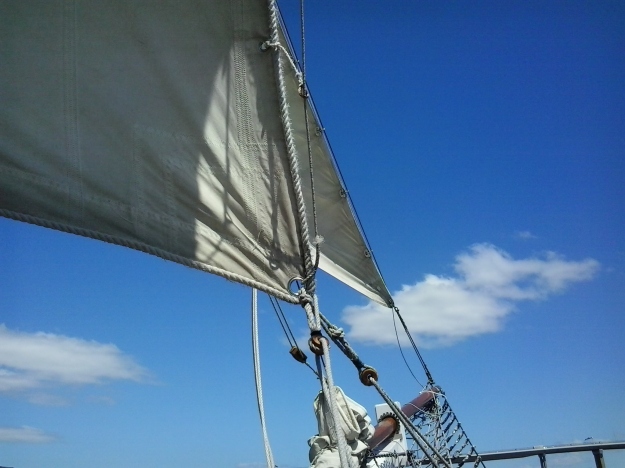 The Lady Nelson was approx 53 feet long ,  approx 17 feet wide and weighed 61 tons. I have compared this with the larger ships that arrived in the Derwent River in the early part of the 19th century and so,  after yesterday’s most stimulating sail, I feel I have a small but greater understanding of what travellers (convicts and free settlers) might have been exposed to at sea before they started their comparatively mild run up the Derwent.

The Lady Nelson replica runs trips lasting a few days; I am considering taking one of these small voyages. Part of the deal, if you wish, is to learn to handle the ropes and even climb around the sails.  I wonder if the 19th century crews allowed such liberties to its passengers.

After motoring up the Derwent River, I watched a vessel berthing at MAC2/3 (the name of one of Hobart piers) in the early evening. I watched the ship being pushed slowly but powerfully by one large tug boat until nudged evenly to the wharf edge. Having checked the Tasports shipping lists, I could not determine which ship this was because none are listed on that wharf in the time frame in which the photographs below clearly indicate a ship was docking.  I realise it is extremely unlikely their lists are inaccurate so I am puzzled.

The docking process takes time. During the process a fishing boat passed directly before me. 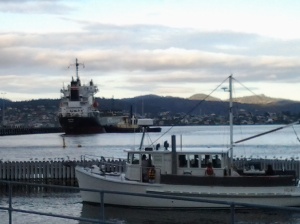 The Derwent River is not a busy shipping route like the Thames River is in London; however, there are sufficient marine vessels moving about the Greater Hobart Area to keep any water watchers alert.