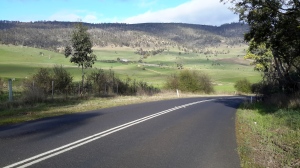 Back on Glenora Road, I loved the landscape in every direction. I am curious- have any city people slotted a green landscape view as background on their computers? When I open my computer and see green vistas it lifts my spirits particularly when I look out of my house window at bricks and mortar everywhere. 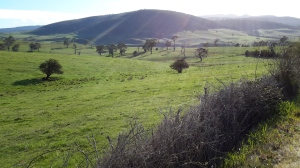 Before long I was passing the expanses of Kinvarra Estate wines. My photos are quite tame compared to those taken by Alphaluma and presented on their website. His are sweeping and dramatic. 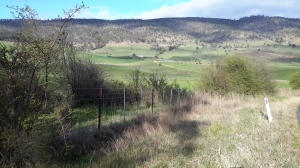 A kilometre or so later I was surprised to see a lycra-clad man walking uphill around a corner and pushing his bicycle towards me. 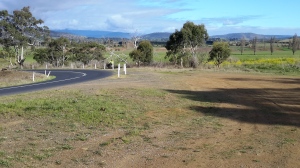 He looked exhausted and so I called out a friendly ‘hello’ and asked him where he had come from so early in the day.  ‘Bushy Park’, he replied.  Then he explained that for the past 12 days he had been on the comparatively new Tasmania Trail which extends from the north-west coast to the south-east margins of Tasmania. In addition, he offered that 13 days ago he hadn’t ridden a bike for years, had bought the new bike that day, then started out immediately. Now he was eager to get home and was headed for Hobart where he would finish his trek and family would pick him up.  This man, who looked like someone’s father, didn’t have the time or strength to continue to Dover much further south but I congratulated him on his achievement.  Whatever means of transport you take through central Tasmania, the challenges are great and he had overcome much to be close to his goal.  So I thought about my sore feet after only one day’s walking, and worked hard to dismiss any negative thoughts.