At 8.50am the bus was darting past the Clifton Beach turn off and then, after speeding across the low lying road of the isthmus, a little after 9am I was stepping off the bus opposite the South Arm shop. For anyone following in my footsteps, if you need a public toilet, there is one near the beach and the South Arm Shop can point you towards it.

The photo below shows the South Arm Shop, a multipurpose village convenience store.

As I stepped off the bus, a wonderful wedge of water beckoned me. This was the Derwent River showing itself down the end of a track to the beach. That track started from a roadway that passed by the Cenotaph where the road made a 90 degree angle bend to head onwards to Opossum Bay, all a short way down from the bus stop. But instead of walking towards the river, I turned back along the main road to find my starting street.

My main task was to reach the starting point of the walk along the Derwent, and then to walk as far along the river’s edge as my feet would carry me before the return bus arrived. From maps it was clear I could walk along the Fort Direction Road to the starting point at Cape Direction and then I could return via the coast for a change of scenery. Fort Direction Road was a few metres away from the bus stop.  As I walked up the road (which wasn’t level and wasn’t going downhill) the expression that this was ‘a decent short pull’ came to mind. I seem to remember Nan used the word ‘pull’ when talking about getting a team of bullocks up a short steep hill. Thankfully the pull only lasted about 5 minutes before I was able to follow a gentle upward incline in a more relaxed fashion.

Coming over the rise of one hill, I was surprised to see the crisp white lighthouse with its sharp red painted top on the Iron Pot, not far over the water from the flat top of Cape Deliverance. With the fresh smogless air, the outlines were smart and the tiny rocky islet seemed so close to the mainland.  I was thrilled to see it.  For years I have heard how the Sydney to Hobart Yachts ‘round’ the Iron Pot to enter the Derwent River every December. Now I can visualise this happening. What a sight it must be if the yachts are bulging with colourful spinnakers. Perhaps visiting the area between Cape Direction and Cape Deliverance for such a spectacle should be added to my ‘to do’ list.

My research unearthed interesting tidbits about the Iron Pot. The http://www.abc.net.au/local/stories/2008/11/03/2408589.htm tells that “From 1832 until the early 1880s the lighthouse was the main feature of the site, warning ships of the treacherous waters through which they were navigating. Then, in 1884, it was decided to build a home next to the lighthouse for its keeper James Parkinson and his ever growing family. The home was built only 20 feet above sea level and made the most of a minimal amount of land. One of the greatest challenges for the residents came in 1895 when 90 feet waves battered the coastline. “Waves were breaking over the top of the lighthouse. The people that were in the house moved into the lighthouse for safety. The storm left kelp hanging in the iron railings on top of the lighthouse. Stories also claim the Parkinson home was found to have substantially shifted on its foundations following the extreme conditions.” The site http://www.seasidelights.com.au/au/tas/ironpot.asp?fState=TAS gives some dramatic stormy photos.

The photo below was taken from Fort Direction Road. The flat headland is Cape Deliverance. The white Iron Pot lighthouse shows near the horizon over the slope of Fort Hill. 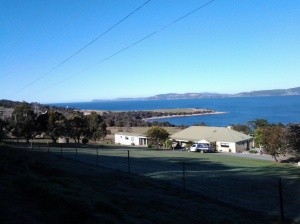 The photo below shows a piece of Cape Deliverance on the left and a piece of the Tinderbox area on the right. In between the two prominences, flows the Derwent River. 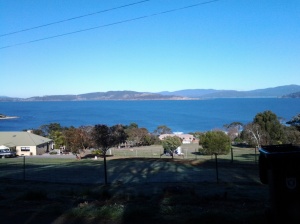