My last post introduced the Expedition Class’s  latest project.  The key man during the journey was Andrew Hughes and now his trek is complete.

The first newspaper coverage of this story was published in The Mercury last May.

The Mercury published another story recently ‘Warm welcome for adventurer Andrew Hughes as he paddles into GASP‘. His journey started north east of Lake St Clair in central Tasmania and now Andrew has crossed an imaginary finish line between the Iron Pot on the eastern side of the Derwent River and Tinderbox on the western side and this conclusion has been covered again in The Mercury.

If you go to the web,  you can read the mini ‘Live Reports’ of the 28 sections of his journey. You can peruse a collection of photos for each section. The information in the reports is limited and no information is offered with the photographs.  Unless you have travelled the  edge of or on the Derwent River, it would be difficult if not impossible to identify locations.

A comparison of some of Andrew’s photos with those I took during my walk from the mouth to the source of the Derwent River, makes for interesting viewing.

Firstly I would like to compare the rush of water over the river rocks between Wayatinah and Butlers Gorge that Andrew saw compared to the low almost absent water level that I experienced on two occasions. Since I completed my walks along the Derwent earlier this year, Tasmania has been inundated with unexpected high levels of rain which have raised the water levels in the dams and the Derwent River.

The photo below was taken by me in October 2015. 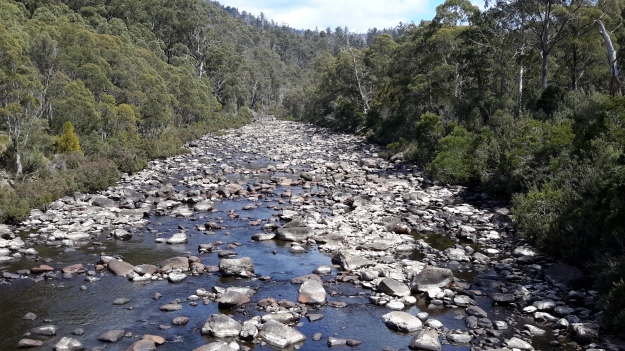 The next photo was taken by me in January 2016 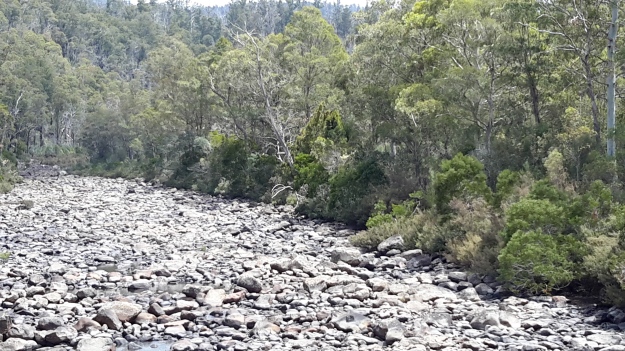 The photo below is by Andrew as shown in his Live Report 18. 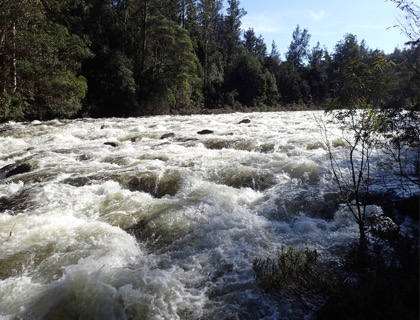 My photo below shows the water level of the huge 15 kilometre Lake King William was so much lower in October 2015.

My photo taken only 2 ½ months later at the beginning of January this year, showed the water level  had dropped dramatically so that the Tasmanian government was considerably worried about our electricity generation options. 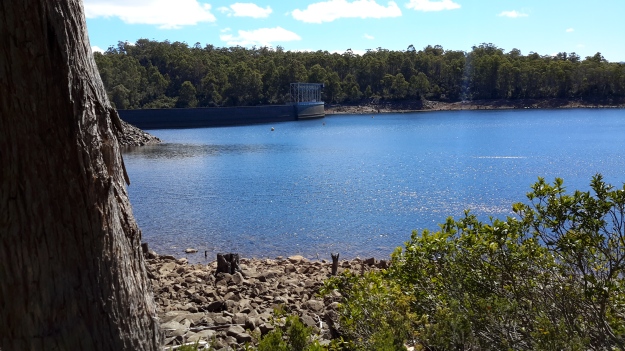 In Live Report 15 Andrew shows the Lake King William water backed up to Clark Dam at Butlers Gorge. Tasmania is no longer worrying about our water storage facilities and power generation. Again we have enough water to create clean electricity.

These photos are wonderful reminders of the unpredictability and power of nature.   Andrew’s reports and photos are an excellent example of people getting out into our Tasmanian wilderness and experiencing it’s challenges and wonders.  I hope his trek inspires others not necessarily to cover the same territory, but to find new country to discover and enjoy.  To be refreshed by the purity of the bush.

Last January artist Justy Phillips and writer Margaret Woodward walked along sections of the Derwent finishing at Lake St Clair using the support of friends.  On some days they were accompanied by others.

This week  I discovered that a group of children are currently engaged in a ‘Derwent River catchment school program’. They started their supported walk further inland in the upper catchment areas of the Derwent River, north west of Lake St Clair, and are yet to commence their trek towards the sea. In winter!  What a strange choice of season to walk with inexperienced young bushwalkers in central Tasmania.

You can read more about their walk in the news story

Details of the program are available on the Expedition Class website.  The site includes ‘Live reports’ which record the extreme weather rather than their progress.  They are yet to walk around Lake St Clair before tackling some of the most challenging sections of the Derwent River.  I wish them all the best.

Since starting my walk from the mouth to the source of the Derwent River late in 2014, I have met people and heard of others who are considering walking the Derwent.  Currently there are no walking paths for most of the 215 kilometres, and the dense almost impenetrable bush along the river edges in the upper reaches, makes this a dangerous activity for inexperienced bush walkers.  Readers of my blog will recall that permission to walk on private land is not always given making some river sections inaccessible – this means that future walkers might not be able to accomplish their goal.  If the numbers of people who seek to walk on private agricultural land increases, then even the most positive and supportive of landowners may decline to allow access to protect their livestock and property.

With the growing interest in undertaking such a journey, the time has come for Tourism Tasmania and the Department of Parks and Wildlife Service to examine the obstacles which need surmounting, to make a walk along the Derwent River possible and safe.