The potential of the volume of water passing down the Derwent River for hydro-electricity generation was seen over a century ago.  While a few power stations were built in the early decades of the 20th century, with an influx of migrants from war ravaged Europe in the 1940s-50s, the numbers of dams and power stations increased quickly.  Overall, many dams and approximately 30 power stations have been built across central Tasmania.

On my way to Lake St Clair, I will reach and walk past each of the following 7 markers along the River:

One of the Hydro websites provides detailed information about these and others which feed into the Derwent River catchment.  In addition, the site includes the diagram below. 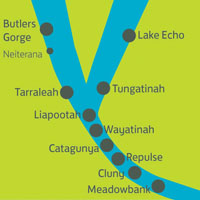