After 15 minutes of walking, following my departure from the powerboat racing arena, the tarred road verges disappeared and weedy grass grew over lumpy and uneven ground to the edge of the Highway. I was forced to stand clear as cars and trucks approached, but there were moments when I could step out a rhythm walking on the Lyell Highway tarmac.  This situation continued for half an hour, however I was pleased that before and after this section I had a good metre or more width of road verge to walk along safely.

The features that could be seen from the Highway were varied: a feeding family of pelicans across the water; prominent Mt Terra on the other side of the Derwent River with Mt Dromedary behind; occasional tiny creeks lost in verdant grasses passing under the road; vehicle pull-offs at the edge of the road so boats could be entered into the water; corrugated iron cut-out full sized cows standing in a paddock; and a paddock full of horses their heads turned towards the sun. 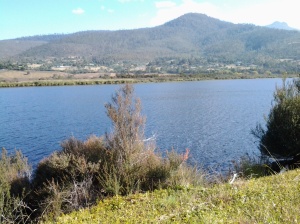 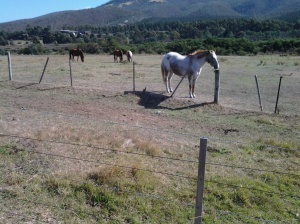 At one part of the walk, in the distance and way south, the peak ‘Collins Cap’ pointed into the autumn sky. 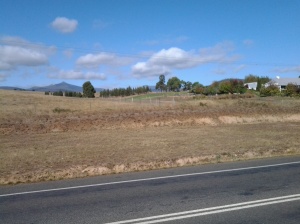 The distant paper making mills at Boyer showed their steaming stacks – an expanse of water, farming land or thickets of trees kept me separated. I knew these mills were very close to New Norfolk so that the larger the buildings seemed, the closer I was to reaching my destination. 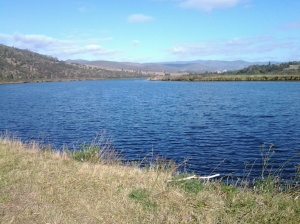 By 10.50am I had a sense that I was returning to peopled land. Firstly I walked passed a long drive leading to a private house at the bottom of the hill; with long rows of old Radiata pines edging the highway.

A few moments later I passed the sheep grazing property named ‘Sunnyside’ on the western side of the road – a sign announced ‘Sunnyside’ was for sale.  You can make an expression of interest at http://www.domain.com.au/property/for-sale/rural/tas/sorell-creek/?adid=2010785567&sp=1 if interested. In the write up on that site, mention is made that the soils are based on limestone – makes the establishment of the lime kilns further south understandable.

At 10.54 am I reached a large cherry growing orchard on my right.

Over the road to my left, on the property named ‘Scottsdale’ sat two old buildings which seemed late 19th century in architectural style. The sign on the gate declared this was the Derwent Dorper Stud (Rams), however this seems not to have a presence on the internet.

I noticed a Derwent Valley Link bus stop outside Scottsdale and the cherry orchard – for fruit pickers or shearers???  Certainly not for me. I had many kilometres yet to walk. New Norfolk was my destination, and so onwards I continued.