I left Trywork Point at 10.30 am intending to walk back along the edge of the River in order to determine what could be achieved without walking on private land. I am delighted to say that the low rocky foreshore from Trywork Point is very walkable if you wear strong ankle supporting boots. Of course it is slower than walking the cattle tracks but quite spellbinding.

I did come upon one section as shown in the photograph above of rocks that rose in the air, and I couldn’t descend (it would be perfectly easy to ascend if walking towards Trywork Point by the rocks, but long legs are required to descend – and mine are short) so I climbed back up to a cattle track and followed that until I reached a gully – no water running and grassed over – where I could easily step down onto a large pebble beach.

Smooth grey driftwood pieces in all sizes and shapes were washed up to where the pebbles met the land.

The blanching shells of thousands of mussel shells and the occasional oyster shell fitted between the pebbles. Detritus, the flotsam and jetsam of human activity was interspersed across the beach. The remains of polystyrofoam containers, blue plastic containers, empty plastic drink bottles, beer bottles, and frayed ropes were typical. Attracted by its bright yellow colour, I picked up a perfect Spalding high-bounce ball which can be used when learning to play tennis.

Around a tiny rocky headland I walked from the large pebble beach to a beach of smaller pebbles. All the while treading slowly as the stones rocked and rolled, and as pieces of rusty metals thrust up unexpectedly from below. At the northern end of this pebble beach, and as I neared the first houses of suburban Tranmere, a falling down fence crossed from the land over the pebbles and continued into the water. Once near the fence, I could see that someone had built a gate that swings in the wind, so that locals can access the beach from the suburban side of the fence.  I passed through the gate and continued on a home grown track for the occasional pedestrian traffic.  There were no signs here or around about indicating entry to the beaches and rocks where I had been walking, was prohibited.

The white structure is the make shift gate through which I had walked.  Note that in the foreground a variety of native pigface fleshy foreshore plant are growing.  Today, the flowers were like jewels as they gleamed in the sun. 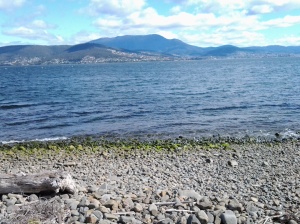 When I looked across the Derwent River, Mount Wellington in all its magnificence towered over Hobart city. The pebble beaches and later pathways offered superb vantage points.

After walking for ten minutes from the gate, on the public verge above the river in front of many houses, I came to a public pathway leading uphill to the road; a steep concrete path that would be impossibly slippery when wet.  The pathway is located between 24a and 26 Vaughan Court and could be the starting point for a legitimate walk to Trywork Point via the rocky foreshore.