From my home overlooking the Derwent River, on this grey overcast wintry Thursday around Hobart, I have just watched a small grey green naval ship charging up the Harbour accompanied by two tugs.  According to TasPORTS, the HMS Arunta was due to arrive at midday and it is now midday as it is edges along MAC4 wharf ready to moor. This perfect timing gives me great confidence in our Royal Australian Navy. Apparently HMS Arunta will depart on Monday at 10am. 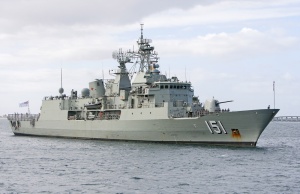 When I checked the Royal Australian Navy website (http://www.navy.gov.au/), it referred to the historic ship, the HMAS Arunta (1) and provided information about the HMAS Arunta (II) (the ship which I have watched this morning). Apparently the HMAS Arunta (1) had a long history including action in World War II, was decommissioned in 1956 before sinking off the coast of NSW in 1969 having been sold for scrap.

The HMS Arunta (11) is a Frigate Helicopter (FHH) ship known as part of the Anzac class. Anzacs are long-range escorts with roles including air defence, anti-submarine warfare, surveillance, reconnaissance and interdiction.The ships are capable of countering simultaneous threats from the air, surface and sub-surface. Each Anzac frigate is fitted with an advanced package of air surveillance radars, omni-directional hull mounted sonar and electronic support systems which interface with a state-of-the-art combat data system.

The name “Arunta” comes from the Arrernte Aboriginal people (also spelt “Arunda” or “Aranda”) located in central Australia. Selection of the Arunta name and original motto ‘Conquer or Die’ recognises the ship’s proud history and the ongoing and special relationship with the ARRERNTE Aboriginal people. To maintain the warm and special bond between HMAS Arunta and the Arrernte people the Arrernte Council presented HMAS Arunta with a flag displaying a Perrente lizard. The lizard is an animal from the dreamtime for the Arrernte people. HMAS Arunta also sponsors a Perrente Lizard, the ships mascot, at Perth Zoo, Western Australia.