As I left Technopark I had a view of a new aspect of the Derwent River.

The Derwent River flows into Prince of Wales Bay and consists of tiny inlets including one at the bottom of the Dowsing Point hill.  I noted there were  no opportunities to walk next to the edge in the bay below – either vegetation hung over the water or private jetties and businesses crowded the edge. 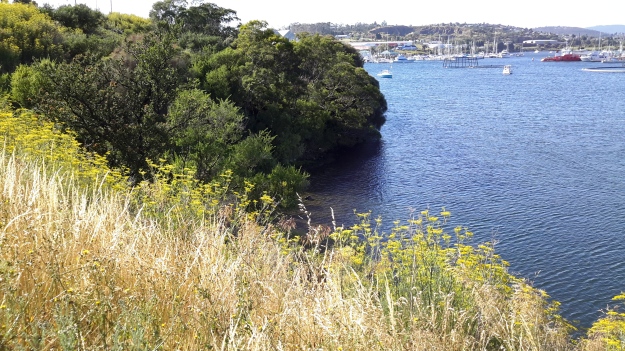 During the many vehicular crossings of the Bowen Bridge that I have made, I could never see where it would be possible to climb down and be under the bridge. Nevertheless I felt there must be a way.

I walked along a path from the Australian Army Derwent Barracks on Goodwood Road that leads to and crosses the bridge.  The quality of the path is variable and I suspect it is not much used. One cyclist passed me on my walk to the bridge and no-one was around during my return trip.

At the bridge I noticed the large bronze plaque marking the official opening of the bridge – heavily graffitied.

But was there a path to the river below?  The absence of signage was not encouraging.

I plodded away from the GASP and Derwent Entertainment Centre site by walking between the Derwent River and the Elwick Race Course where dogs and horses race regularly for their owners.  I heard the rhythmical thumping on the turf before two trainers galloping their horses came into view over the barb wired fence.

Otherwise all seemed quiet in that direction. Obviously it wasn’t a race day – well not then. Possibly it was too early in the day.  I walked along the long and winding Loyd Lane past a Department of Defence enclosure around 9.15am.  This is a little used road and pale green lichens were spreading across the bitumen in Rorschach test like splotches.

Before 9.20am I had reached a bar across the road which I walked around to discover inside the Commonwealth Government property was a Regional Training Centre and the base for the First Military Police Battalion, and the 4 Section 8 Platoon Company.  The gates were all locked and there was no sign of life on the other side of the fences.

I continued along the road, reached the T junction with Park Rd, checked my map and found accessing the River improbable so I continued the few metres to the next T junction, with Centre Road. But there was no walking possible this way. The Road was strongly gated and locked and the signs indicated the Australian Army Derwent Barracks was inside.  Effectively I was denied access to the Derwent River from the end of GASP.

I did not achieve success with edging that headland which pushes out into the Derwent River and which is split in half by Goodwood Road to the Bowen Bridge. I have an idea that perhaps there is another way and at some future time I will try again to follow the River on the northern side.  I didn’t have much more success on the southern side of the Bridge, but again I am inclined to return and to see what else is possible.

So, on Stage 10 of my walk, I proceeded to the traffic lights intersection of Loyd Lane, Goodwood Road and over to the other side at Howard Road. It was 9.30am.