On Stage 14 , I reached the turn off from the Lyell Highway around 12.45 pm and stopped to read my maps in order to be certain that I would find an alternative trail situated closer to the edge of the Derwent River than the highway.  From this boat ramp road (has a sign with boat ramp symbol on the highway), the trail looked definite and continuous so I peeled off from the Highway.

A few metres along the gravel road, a ‘parkland’ to the left of the road was covered with the gentle leaf droppings of the surrounding gum trees. In the dappled light, I noticed a row of large rocks standing to attention neatly, each with a name tag. 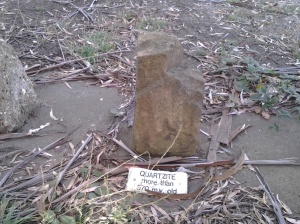 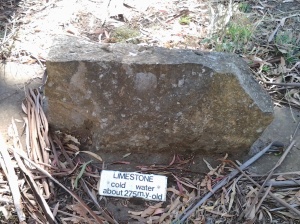 A few metres from the rock row, a sign provided additional information. It seems the sign was placed here in 1988 as part of the Australian Bicentennial year of celebrations of European settlement. Who by and why is not clear. 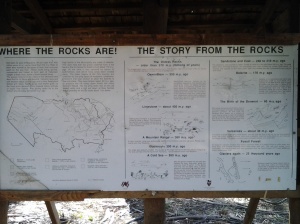 Why was this location chosen to present this display?  Who, apart from the occasional walker like me, would find and examine this display? People travelling in vehicles would not be stopping to look. Rather they would be focussed on reaching the river edge ramp to launch their boats. Very strange.