My previous posting explained that the first part of my Stage 12 walk along the Derwent River took me to Wandella Ave but then I retraced some steps and took an Alum Cliff-side disused track, which ultimately resulted in my returning to Wandella Avenue.

So – when you walk from Hinsby Beach and the track arrives at Wandella Ave, turn left, walk for a short while and then turn right into Baringa Rd (the signpost for this is missing). Continue walking around and uphill until you reach the junction with the Channel Highway. I reached there at 9.44am

I enjoyed soaking in the view across the Derwent River where I could see Gellibrand Point and Opossum Bay. 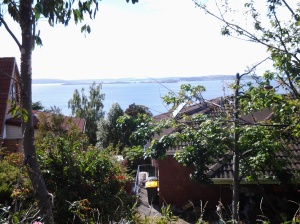 Further down the River, South Arm and Fort Direction Hill were visible at the mouth of the Derwent on the eastern shore.

I turned left onto the Channel Highway (which has no footpath) and was able, for some metres, to walk inside a guard rail and then later on a narrow gravel verge with traffic streaming by.  At 9.50 am I was passing the sign indicating this was the Huon Trail Touring Route.

In the bush which I had clambered through earlier and now as I walked along the road, I was concerned to see an exotic which has escaped and been self-seeding rapidly everywhere.  I don’t know the name of the plant but from experience in my own garden, I know it grows fast and furiously into a medium sized plant with a purple pea flower. I did pull out some of the smaller plants and with the moist soil the roots came out as well.  But there were thousands of plants and continuing my walk was the greater priority, so I stopped pulling.

Further up the road, I could see the top of the Shot Tower above the trees. 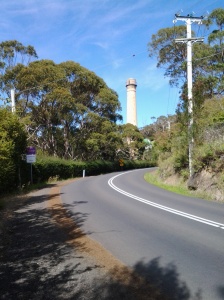 Before long I was standing outside the Shot Tower complex. The time was 10.05am. 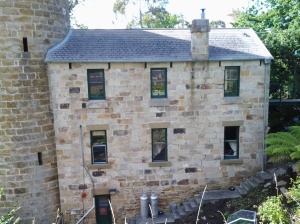 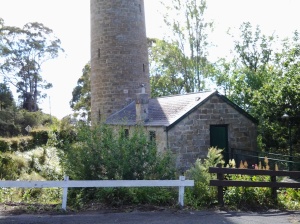 The person manning the souvenir shop and entrance to the Tower gave me a booklet with all the tracks and walks in the Kingborough area, and he pointed out a nearby gum tree just over a rise. ‘That’s where the Alum Cliffs track starts’, he told me. He felt sure the Kingborough Council were ready to build the final part of the Alum Cliffs track from the Shot Tower to Hinsby Beach so I guess we wait and see what progress is made in the months to come.  However, it does seem the track won’t be marked out close to the Cliff edges on that northern part.

On my list of things to do in the future will be to return to the Shot Tower to take the walk up the many stairs and look out over where I have walked. The cost is only $8 including the opportunity to watch an interpretative DVD. The Shot Tower site includes a shop, museum, carpark and public toilets.  Plus the fabulous view!

2 thoughts on “Wandella Avenue to the Shot Tower, Tasmania”