Last Friday/Saturday the fourth stage of my walk along the Derwent River finished in Bellerive. Being curious to know a little history of this Hobart suburb’s existence, I discovered it was first settled in the 1820s after years of people ferrying across the Derwent River from Hobart Town. Its first name was Kangaroo Point.  No prizes for guessing why.  Apparently the area abounded with native kangaroos (and/or perhaps the prolific Bennetts Wallaby which is often referred to as a kangaroo).

The name changed from Kangaroo Point to Bellerive around 1830, using the French language as inspiration: bel = ‘beautiful’ + rive = ‘bank’.

The Glover painting is at home in the Tasmanian Museum and Art Gallery in Hobart.  This picture interests me because some of the original indigenous land owners, the Moomairremener people, have been depicted on the banks of Kangaroo Point, and there is very little sign of the ‘civilisation’ of Hobart Town on the other side of the Derwent River.  By contrast, 30 odd years later von Guerard’s print shows considerable build-up of Hobart Town beneath a snow capped Mount Wellington. 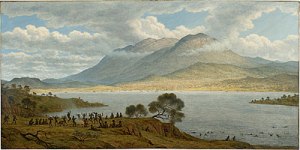 The von Guerard lithograph is at home in the National Gallery of Victoria in Melbourne.

These days, Bellerive is a suburb of the Greater Hobart Area completely covered with streets and houses of every vintage. With its easy access to excellent sandy beaches, a vibrant village shopping centre, the regular presentation of fantastic free public festivals, and safe marina, Bellerive is a great place to live or visit.