One of my August blog postings extolled the magnificence of the Tasmanian Symphony Orchestra Chorus in a series of performances at MONA by the western shore of the Derwent River in the northern suburbs of the Greater Hobart Area.

Last night I travelled to another institution, the University of Tasmania, which has its lower boundary almost at Derwent River level on the western shore, south of the Hobart city centre. I was so pleased that to continue an annual visiting artist series, the Tasmanian Conservatorium of Music had joined forces with the Hobart Organ Society to bring world renowned pipe organist John O’Donnell to Hobart. 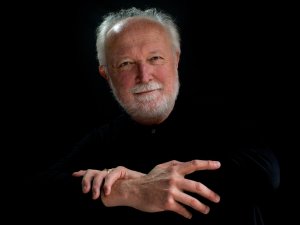 I have listened to pipe organs being played in various places around the world but last night’s performance exceeded all expectations. In the hands of a non-expert, the sounds from a pipe organ can sound muddily mixed and your ears can feel assaulted.  Or the playing can sound lack lustre, colourless, and dull. Or irregular pacing can make me, as a listener, believe the organist hasn’t practised well enough and isn’t able to keep to the time signature.  That he or she isn’t as familiar with the musical piece as they ought to be before they play for public entertainment and pleasure.  In those instances there is minimal or no pleasure. But last night, John O’Donnell was nimble of finger across the keyboards, agile with his hip and leg movements to control the multitude of foot pedals, and most importantly made music with his touch. This wasn’t sound it was music. Lyrical. Magical. He made the composer’s scores come alive.

Listening to such music through headphones as you walk along, or blasting from a sound system in your own home, is no substitute for hearing the sounds in an environment where the acoustics work and the nuances of the music embrace you.  The concert was intense.  Intensely rich and beautiful.

I wondered on the effects of significant rivers in the lives of the composers from last night’s concerts.

17th century composer Muffat spent 6 years in Paris near the Seine River before settling in Vienna next to the Fluviul Dunarea. Corelli lived for a time early in his life near the river Po in Italy and later when settled in Rome, he had access to the Fiume Tevere that winds its way through. Pachelbel started life in Nuremberg through which the Reglitz flows. Later he studied at Regensberg around the Fluviul Dunarea, before moving to Vienna also on the same river, then Stuttgart on the Neckar river before settling back in Nuremberg against the Reglitz river for the rest of his life. Johann Sebastian Bach moved as a teenager to Luneberg next to the Ilmenau River. During Bach’s time in Weimar he could have accessed a number of rivers which enter into or are nearby to this city. When he was in Mulhausen, the Unstrut river and a tributary were close at hand. A multitude of rivers and tributaries flow through Liepzig where Bach spent 27 years.

I don’t want to mislead any readers. The connections between composers and rivers is a geographical one and I do not believe the rivers that they lived near had direct musical relevance. But the advantage of this tiny research to me was that I was able to understand a little more of the world’s geography and the interconnectedness of so many things; history, people, musical development. As a result, the experience of my project to walk along the Derwent River is enriched.

At Synaesthesia 2014 today and yet again honouring their brilliant inaugural performance last year at MONA’s first Synaesthesia event, the Tasmanian Symphony Orchestra Chorus were the stars: their performances all triumphs of ingenuity, great craftsmanship, elegance and beautiful musicality.

Two different types of ethereal performance were on offer.

For the first, the only instruction to the would-be audience was to head to the Barrel room. MONA, the Museum Of Old and New Art is located within a vineyard and winery, and the Wine Bar on the hill away from the museum, sits atop a number of rooms lined with wine carrying barrels. Rugged up against the low temperatures, visitors climbed the steps away from the museum and found the entrance to the Barrel room inside the Wine Bar. I knew that only 50 people were being allowed in to see each of the three scheduled performances, so I joined the queue early. Soon we were being counted through the door, and urged down stairs and into a large concrete room.

In the centre of the room, seated in four rows with two facing the other two rows, were chorus members dressed in black.  Chorus Master June Tyzack stood at one end of the rows with her back to a wall laden with dun coloured barrels. The audience filed in and spread around the chorus. Some sat and others stood.

A strong smell pervaded the space. Ga reminded me that this was like the pure alcohol floating off a fruit pudding when brandy is set alight at Christmas. Astringent. At Christmas the smell bursts and disappears almost instantaneously. By contrast, the odour in the barrel room was permanent, invasive and not particularly pleasant.

Then someone flicked all the switches. I closed my eyes. And bravely the chorus sang in the dark without the benefit of a conductor and sheet music. Without being able to see. In the pitch black. With perfect pitch. Remarkable. Marvellous. Between three short choral pieces, the chorus master acted as a narrator and mood creator with a voice-over that provided a seamless link from the past to the later sounds. In addition, occasionally members of the chorus hummed, breathed, and made other sounds so that the continuity of the whole event was maintained.

The concept was original. The execution total quality. This was breathtaking. The Barrel room performance provided a feast for the aural senses, without the distraction of things visual. The performance, despite being sophisticated and complex, appeared to be deceptively simple. This made the offerings by the chorus instantaneously accessible to listeners.  People filed out feeling some new richer space had been created in their beings to hold more.

When the Chorus returned to perform anew, this time they gathered in an arc at one end of the Nolan room. With barely sufficient light, they watched their chorus master lead them to make a string of sweet and discordant sounds. Sounds which echoed. Sounds which bounced along the walls. Sounds that whished into crevices. Sounds that whispered and scuttled. Sounds that dragged and stopped suddenly. When their lights were switched off, the chorus members formed into a line, gathered lit candles and ascended the stairs.  Their procession through a long gallery was led by two choristers dragging a cello case. What was this all about one wondered. The parade, with its character of a monastic religious observance, was punctuated by ritual stops that provided the space for lines of a song to be sung by different voices in the chorus, and then they moved on through the gallery spaces towards a cellist playing rich mellow tones.

Near the cellist, the instrument case was laid on the floor and the candles were arranged around in the form of an offering. Meanwhile, the chorus members prostrated themselves before this icon and wailed cries to the gods. The picture of a religious ceremony was complete.  Duties complete, the chorus rose and walked on towards the switchback-stairwell. Eventually a core of singers arranged themselves down one section of the staircase and sang. When the remainder of the chorus filled other sections of the stairs and opened their hearts and voices, the sound was sublime.

This performance was profoundly moving.

Why was listening to the Chorus special to experience? And why was their performances more interesting and exciting than the instrumental pieces? I can think of a few reasons.

Not only did I have the pleasure of listening to thrilling musical sounds, but I also had the pleasure of seeing and understanding that this music is made directly by people as living breathing entities. There was life and vitality in the people and in the performance. These performances were not dedicated to music as something separate from people.

As an audience member I was taken on a journey. The physical journey took me out of my comfort zone (in the lightless Barrel room), and it encouraged me to walk as the Chorus moved around the Gallery (during the second performance). Both performances provoked me to question what was happening and why, and because I was required to think, these performances gave me more to do than simply acting like a sponge or acquiring the music by something like osmosis.  Having ‘work’ to do was exciting.

The inventiveness of costume, lights and location, all contributed to a series of spectacles today.  But most importantly, the arrangement and performance of the music was entertaining. I came to Synaesthesia 2014 hoping to be enthralled, taken away from myself, uplifted and entertained on many levels. I am delighted to say my expectations were exceeded. I floated away with (not away from) the Tasmanian Symphony Orchestra Chorus. A truly pleasurable and memorable experience. Next to the Derwent river.