After leaving breezy Blinking Billy Point, I arrived back on the main road (Sandy Bay Road) at 10.20am, and turned left ready to continue my southward walk.

I was aware the Alexandra Battery once stood in all its glory, waiting to defend Hobart Town from invaders, on the large hill on the other side of the road. Construction on this site commenced around 1880 using stone from the dismantled Battery Point batteries. The heartfelt need of 19th century locals to defend the Derwent River and the new settlements from Russian invasion along its edges has never seemed necessary to me. When I read the following Wikipedia entry I could only think about how fear feeds off misunderstandings. “On 11 May 1870, the corvette Boyarin appeared at the Derwent River and rumours spread in Hobart that a Russian invasion was almost a certainty. The reason for the appearance of the Russian warship was humanitarian in nature; the ship’s purser was ill and Captain Serkov gained permission to hospitalise Grigory Belavin and remain in port for two weeks to replenish supplies and give the crew opportunity for some shore leave. The ship’s officers were guests at the Governor’s Ball held in honour of the birthday of Queen Victoria, and The Mercury (newspaper) noted that the officers were gallant and spoke three languages including English and French. The following day a parade was held, and the crew of the Boyarin raised the Union Jack (the colonys’ ‘national’ flag) on its mast and fired a 21-gun salute in honour to the British queen. This was reciprocated by the town garrison which raised the Russian Naval flag of Saint Andrew and fired a salute in honour of Tsar Alexander II. After the death of Belavin, permission was given to bury him on shore, and his funeral saw the attendance of thousands of Hobart residents, and the locals donated funds to provide for a headstone on his grave. In gratitude of the welcome and care given by the Hobart citizenry, Captain Serkov presented the city with two mortars from the ship, which still stand at the entrance to the Anglesea Barracks. When the Boyarin left Hobart on 12 June, a military band onshore played God Save the Tsar, and the ship’s crew replied by playing God Save the Queen (then our national anthem).”

Alexandra Battery is currently a public access park with some of the original structures embedded in the landscape.  I imagine the view along and across the Derwent River would be spectacular, but since visiting the site would have moved me away from the water, I simply walked on and made a mental note to come back another time and have a close look.  This hill would provide an easily accessible location on which to watch the dying stages of the first Sydney to Hobart Yacht race yachts surging towards the finish line.  I must remember that at the end of this year.

By 10.25am I was continuing past the junction of Sandy Bay Road with Churchill Ave a major thoroughfare wandering across the lower slopes of Mount Nelson.  All the time I was inspecting houses and gardens.  I cannot imagine why an old fashioned red telephone box is now pride of place at the top of entrance stairs to this house.

I seriously contemplated popping over to this pub (Riverview Inn) for a glass of cold wine, but restrained myself.  I am surprised with my self-discipline that I have passed a great number of good ‘watering holes’ but have not deviated from the walk – so far. 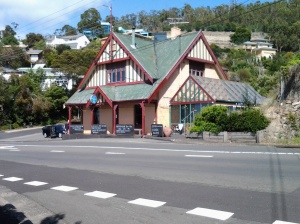 Twenty minutes later I reached Pearce’s Park.  I had never realised before but there are two bits of this Park located either side of the road but with quite some distance between them down the road. Rather strange.  The sign at the Park on the Derwent River side declared it was created to become ‘a window to the River Derwent’.

An excellent idea to break the relentless strip of residences hogging the river’s edge.  I could look across the Derwent River to Trywork Point south of the suburb of Tranmere on the eastern shore.  Sulphur Crested Cockatoos screeched somewhere behind me.  The day seemed so beautiful.

Around 11am I stood at the entrance to the Cartwright Park Reserve.  This parkland swept downhill through open forest and a cleared area with flitting cheeky Wrens, before arriving on a rocky shore of the Derwent River near Cartwright Creek.  The last part of this informal track was a mix of slippery dirt and pebbles and intrusive tree roots like bad varicose veins rippling through the surface – the track was not for those with poor balance or walking limitations.  And the range of rocks on the shore were most unstable and required great care to navigate safely. I learnt this area was settled by the brothers who established the Grange Estate (around the corner in Taroona) in the 1820s. It all seems so long ago, and I can’t help thinking how isolated the area would have been. Beautiful yes, but remote from Hobart Town.  I wonder if the settlers reached the area by boats or whether it was a horse riding trip.  Did they bring in provisions with teams of bullocks.

Once I was stepping across the foreshore rocks it was clear that the track had come to an end. However, because I never like to retrace my steps unless I absolutely must, I stumbled on.  I wondered if I could get back to a road or a track if I continued. I aimed at reaching a tiny smidgin of sand and then decided I would walk up a set of weathered wooden steps next to a blue-doored boathouse.  Was this private property? There were no signs declaring restricted access. It certainly wasn’t clear at the bottom of the steps what the status of the steps was, so I felt it wasn’t unreasonable for me to climb up and find out more.  As it turned out, I walked through someone’s garden (quite lovely) and eventually let myself out through a security gate onto Grange Avenue.  Thankfully no guard dogs were in attendance. The time was 11.20am.

If I had stayed on the main road I would have seen the signs indicating I was leaving the City of Hobart and changing into the Municipality of Kingborough.  As it was, all I knew was that I was leaving Lower Sandy Bay and entering into the suburb of Taroona – and enjoying every moment.