Wandering down the track towards Lowestoft Bay, Berriedale’s Caravan Park and the headland with MONA were visible.

Eventually at 3pm, I reached the northern end of the Lowestoft Bay and could see the Bay stretching around to the Berriedale Caravan Park.

Once on the open mowed green parklands, clear walking tracks were easily accessible.

The most amazing discovery of this 9th stage of my walk along the Derwent River was a significant memorial to the dogs that had been part of Australia’s fighting forces. 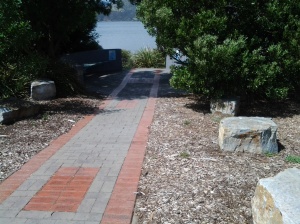 This memorial was so unexpected; a remarkable series of features the like of which I have never seen before.  How many readers knew it was there?