The first sign which greeted me alerted me that only members and their guests were welcome on this property. 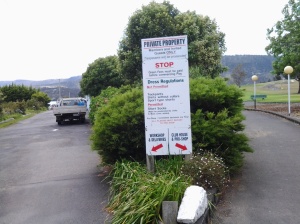 I stood wondering whether I would simply walk away or investigate further. The peninsula, which the Claremont Golf Course occupies, covers many acres but most importantly it causes the Derwent River to deviate dramatically from a straight path. As such I felt I needed to walk around the edge of this substantial piece of land so I would feel that I had truly walked the length of the Derwent River on the western shore.

I sucked in a deep breath and, feeling less than classy with my wrecked wild hair, I walked into the Golf Club house. 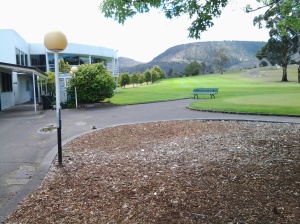 “Can I help you?”, I was asked by a man who appeared seemingly from nowhere. Briefly I explained my walking the Derwent project, registered that I had read the ‘private property’ sign, and asked if there was any chance I could have permission to walk the perimeter. I was amazed that the answer was yes on the basis that only a few people were playing and they were mostly located in the central area. The answer was yes on the condition that, if I did not return within an hour, he would come looking for me.

I thought I would cover the edge in half the time.  How wrong I was. The time was 11.28am as I stepped out to follow a vehicular road on the northern side of the peninsula and it was 12.25 as I returned from the southern direction north to the Club house to show I had returned unscathed. 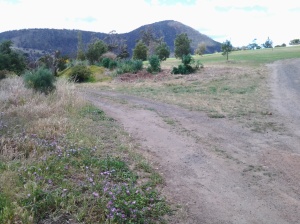 Eastfacing views in which I could identify traffic on the East Derwent Highway: 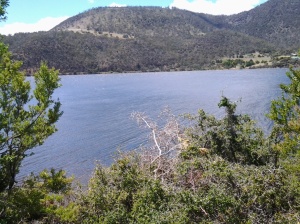 Golf course views (in second image notice the players on the course):

Near Dogshear Point at end of green: 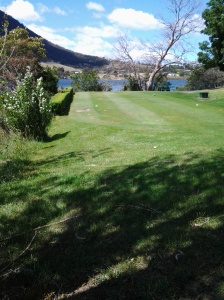 The views from Dogshear Point and then further around on the southern side (note the first image looks back to the area where I scrambled through spiky roses and brambling blackberries on the eastern shore, the second image shows a delightful placid bay slightly south west of Dogshear Point and the third and fourth images remind me that Mount Wellington is again looming over my walk): 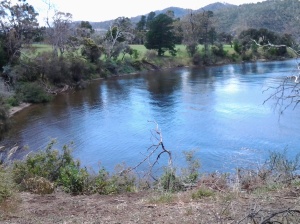 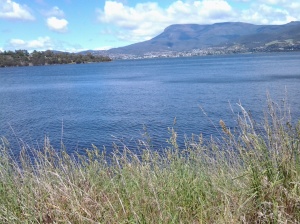 That walk was a beautiful, sweet smelling, bird song filled but scary experience. The golf members were generally playing in the centre but some were working on holes closer to the edge. Initially, while on the vehicular track, there was a hill separating me from the course so I couldn’t see the players and their balls and so I had no idea whether I should duck. We all know how balls can be hit into the rough, and the day was exceptionally windy which I imagined could send a ball even further off course than a player might intend. Sometimes I was walking in the rough and sometimes I was walking on fairways and on the bright coloured manicured greens of specific Holes. The golf course has been designed in part to finish at the top of cliffs overlooking the Derwent River and sometimes there was no way I could walk the edge without being on the actual golf course. I was always looking around me to be sure that when a player was about to hit their ball I could see where the ball was travelling to. Rather unnerving.

I wouldn’t be prepared to walk on this golf course again with players out and about. However I am glad to have had the chance to find new vantage points to see up and down the Derwent River and beyond. I wouldn’t recommend others follow in my footsteps (even if permission was given to you) despite the pleasures of the experience.

Towards the end of my walk around the Golf course, I passed a copse of trees one of which had a sign attached.  Who was Molly?

The Cadbury confectionary factory is located just over the fence from the Golf course and the closer I walked to the fenceline the more prominently it showed itself through the trees. 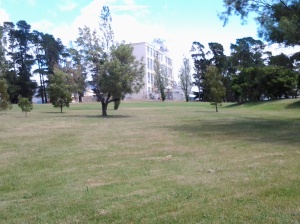 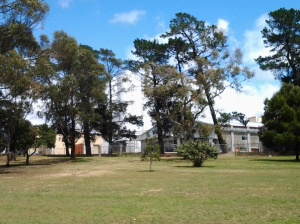 Then the Claremont Golf Club house came into focus. 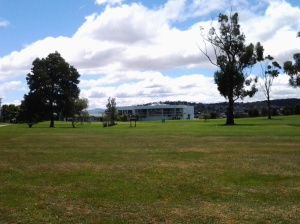 This leg of stage 9 of my walk along the Derwent River was over. It was time to explore the Cadbury chocolate factory.