On the first leg of this stage at 8.26am, I started by walking south on the Main Road from the York Hotel in Granton South with a view of white capped wind-blown waves on the Derwent River next to me, and the suburb of Bridgewater across on the other side.

At 8.42am I passed the Lagoon General Store and Servo and by 8.49am I had reached the start of a pathway leaving from the Main Road and leading around the Goulds Lagoon Bird Sanctuary. This was a peaceful alternative to the noisy main road. All manner of wild fowl, other birds, animals and plants could be seen including ducks, rosella parrots, rabbits, wild mushrooms, seagulls, handsome gum trees with their fresh smell of eucalyptus, and a cluster of spectacular Eastern Great Egrets. Spotted across the Lagoon were bird-breeding boxes.  The air was deliciously moist and the grass was high. This was not a track for those in wheelchairs, pushing prams or walking with crutches. 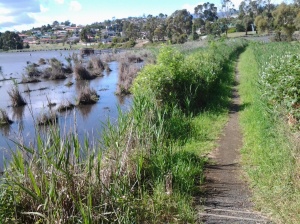 By 9.07am I had circled Goulds Lagoon and was back on the main road at the edge of the Hestercombe Reserve.

Continuing southwards, I passed by the area known as Ten Mile Hill without trying to squeeze through barbed-wire topped gates blocking roads to timber mills and other ‘private property’. By 9.24am I had reached the northern end of St Virgil’s College with its signage indicating ‘private property’.  Effectively these businesses and educational institutions prevented me having direct access to walk along the Derwent River.  I thought I might walk along the railway line corridor closer to the River, but since it passed through some of the private property I chose not to do so.