After walking across the Shot Tower carpark I had one last look back to where I had been. The sky was amazing. 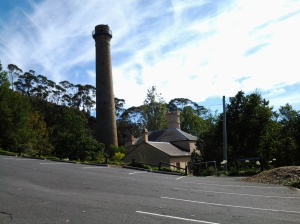 A sign seen at 10.08am indicated the start of the Alum Cliffs track. 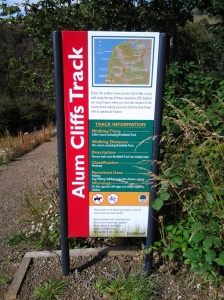 Then I began the careful descent on a steep 100 metres or so length of a four wheel drive wide smooth gravel track. Partly eroded. Basic stairs were irregularly constructed on one side of this incline.  Bush either side.  A small wallaby surprised me bouncing through the undergrowth.

At 10.15 am I reached the creek crossing below. Peaceful.  Looking up, an even longer climb on the other side was rather dispiriting. On the trek uphill I stopped and sat for a while to take in the view of dense gum tree foliage. There were smooth gum trunks as far as the eye could see.  No wind. Trickling creek below. Peaceful.   As I walked higher, the Shot Tower came into view bit by bit over the trees. 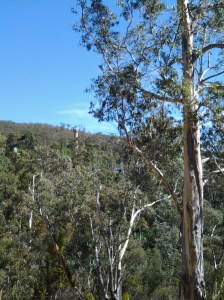 It was 10.33am when I reached a picnic table and lookout at the top of the Alum Cliffs.

Passing white crowned toadstools with sharp white gills when open, I walked along a shady path which was quiet except for the occasional birdsong, rustling water in the creek below, or the soft voices of other walkers. I learnt from one of the walkers that the Alum Cliffs track used to follow the edge and in order to cross creek gullies, ropes were installed up and down the cliff to steady yourself during the climbs.  Part of those walks included rock hopping along the shoreline as well.

At 10.45am I reached the turn-off to Taronga Road – I did not want to exit the Cliff walk so I continued on. At 10.53am I reached the junction with the Brickfields Track – another time I will return to this area and walk that track to look at the remains of any social history along the way.

A few minutes afterwards, I felt I was identifying exposed alum rock.  I decided it was the rock which had partly oxidised into a greenish colour in places. Whether or not it is the real deal I cannot say. 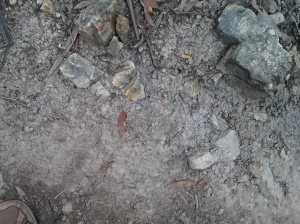 Despite tree roots and rocks intruding on this track, the well-trodden dirt with a slight leaf covering made for very easy walking.  Off to the side of the track walking would not have been quick and easy. 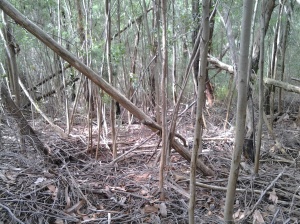 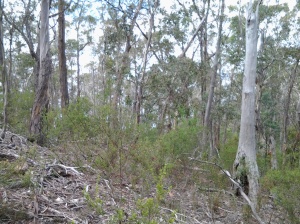 I loved the colours on gum tree trunks as bark peeled away naturally. 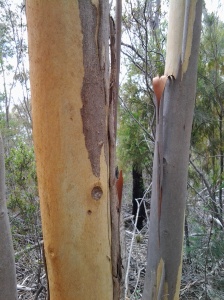 I loved seeing the signs of insects which once burrowed their way under the tree bark. 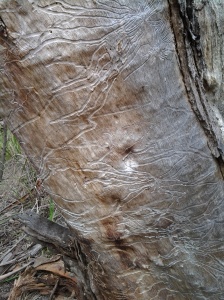 At 11.07am I reached a seat with a viewing platform from where I watched an oil tanker motoring up the Derwent, having passed Gellibrand Point on the eastern shore. 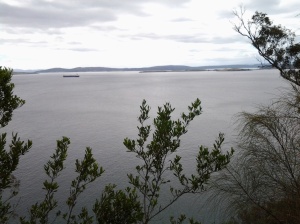 It was a long way down to the River over the Cliffs. 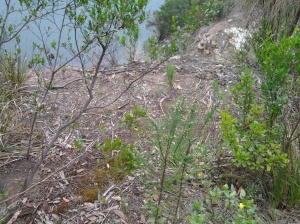 Then I walked some way with another walker until I needed to stop and start with notetaking and the clicking of photographs.  I continued down across another creek and stopped when I noticed the clay at the bottom.  My earlier research/posting had indicated a connection between the alum rock and clay. 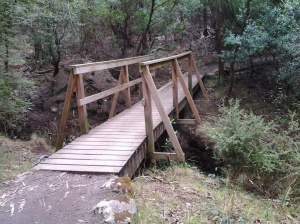 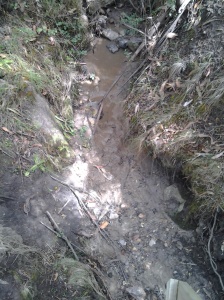 The track passed through a tiny wet forest area with green pronged tree ferns.  Back up onto a drier track I reached a picnic table at 11.26am. Nearby, a teepee of tree branches and leaves had been built casually.  Would it be better than no shelter in a rainy storm?  Not too sure how long the ‘tent’ would survive much wind. 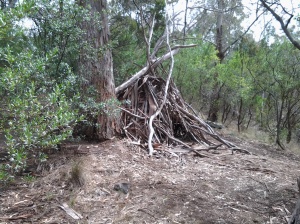 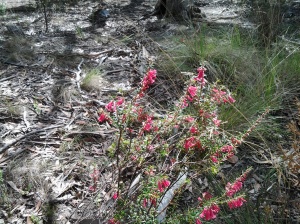 I passed smaller tracks off to the left which ended by hovering over the edge of the Cliff, and some to the right which I imagine found their way back into suburbia or onto the Channel Highway.

A glossy scarlet red spider, black legs with a blue iridescent tail crossed my path.  I have never seen one before and knew nothing until I researched once back home; this was Nicodamidae –Red and Black Spider.  Apparently, ‘toxicity unknown, treat with caution’.  Trust me – I didn’t touch it.  The size was that of a woman’s finger nail.

Not long after chatting with a man and his dog, at 11.40am through the trees I could see bits and pieces of Kingston Beach.  My trek across the Alum Cliffs was almost over.