After a short (45 minutes) and steep walk Andrew chose the easiest exit and popped out of the forest and onto the Derwent. He felt pleasantly relieved that the descent had been easier than expected although ‘not a walk in the park’. At that point, the river bed was mostly water-worn dolerite boulders, but he was surprised there was much more water than expected (or wanted). While there was lots of water rushing around, thankfully there were also plenty of dry rock tops suitable for rock hopping.

There was a fair gradient on the river; the river drops 150 metres from the start of the walk to Wayatinah. The result was high noise levels as the water rushed downstream. 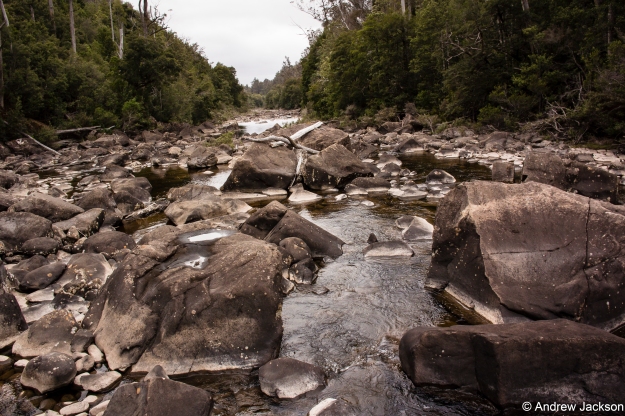 Swapping boots for Dunlop Volleys (good for river walking because of their excellent grip), Andrew progressed downstream hopping from rock to rock. It was not speedy as great care had to be taken to avoid twisting an ankle, but it meant dry feet. 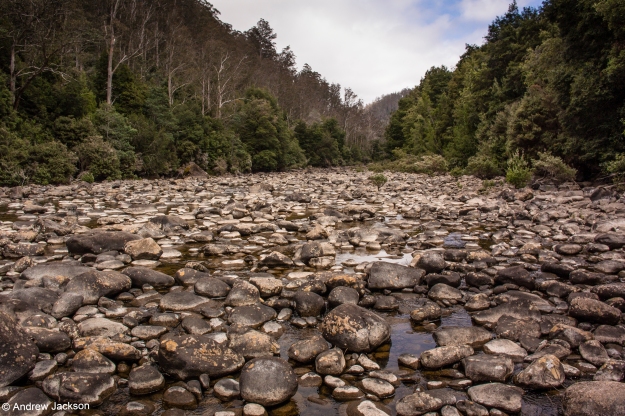 Occasionally great mounds of flood debris were piled high above the river level, and tangled in the scrub on the river banks – evidence that this was the summer-level of low water and that no water was coming over the Butlers Gorge dam spillway further inland.  While most tangles were at the river edges, one huge beaver-like dam was created by the obstruction of an island in midstream.  All of these required effort and care to pass over and by.  Awkward and unpleasant. 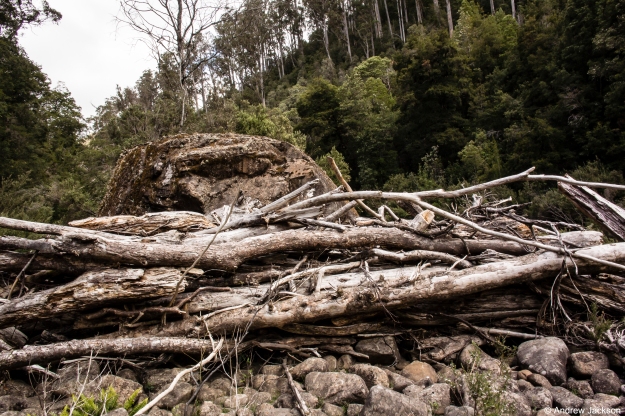 Throughout the walk down the river, very often the water undercut the banks, uncovering tree roots and weakening their hold on the land – many had toppled across the river creating new impediments to progress.