A couple of weeks ago an international Test cricket match between Australia and the West Indies was staged at the Blundstone Arena in Bellerive. Australian cricket tragics (but probably not those from the West Indies) may enjoy these photos. When you stand in the open or sit in the grandstands, fabulous views of the Derwent appear before you and distract.  Cricket Tasmania’s website  shows a glorious aerial shot of the Arena with the Derwent River beyond and mysterious Mount Wellington looming behind the city.

Last Friday night, I was on the Hobart Domain at the Hobart tennis courts. First I watched retired Tasmanian tennis player Richard Fromberg (he reached about number 20 in the world when he was playing on the world circuit) play an up and coming Tasmanian player, Harry Bourchier, who hopes to break into the Australian Open Grand Slam in January.  Fromberg is circled below watching a later match. 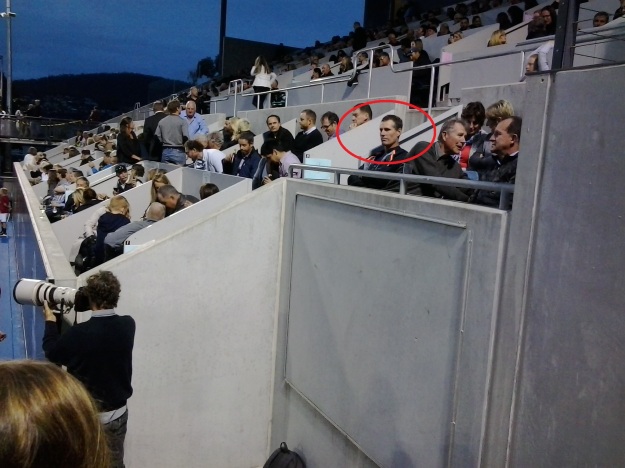 A fun doubles game followed with two 7 year olds (one of which was Cruz Hewitt, Lleyton Hewitt’s son) teaming up with their adult coaches to play a short game.  Those extraordinary 7 year olds stood firmly at the base line and served their balls over the net, despite the net being a great distance off and higher than they were tall. The night finished with ex World number 1 tennis player Lleyton Hewitt playing an exhibition match against Australian Sam Groth who currently has the fastest serve in the world.  In the photo below, Groth wears red at the left of the net and Hewitt wears blacks to the right.

I was thrilled by the hard and fast hitting.  A good game!

Beforehand I wandered to one end of the main court and looked out through an overcast evening, to the Derwent River. 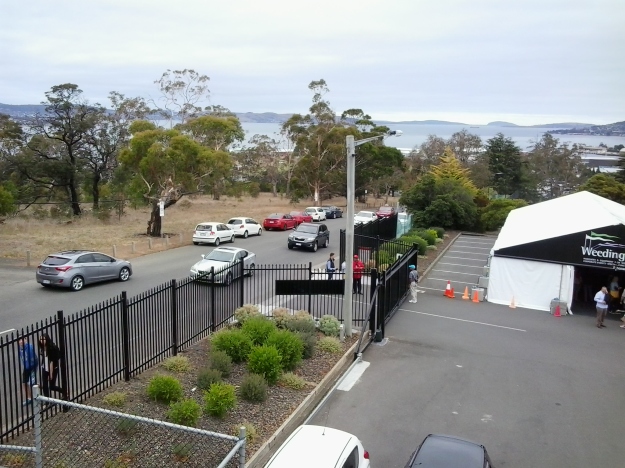 On occasions when the sky is clear and blue, the Derwent River sparkles.  Getty Images has one shot I particularly like.  The blue tennis court in the foreground seems separated from the Derwent River by a giant cruise ship at anchor in port.