A few minutes before 8am on Stage 13, I started walking on the Suncoast Headlands Walking Track.  Initially, the track ran directly next to the Blackmans Bay Beach and then began to rise up onto the headland and continue between fenced private houses and the Derwent River. The early part of the track was directly west and so I had strong sunlight straight into my eyes, temporarily blinding me from looking at the surrounding vegetation as I walked.

Just after 8am the track turned right and I looked down into a rock edged bay.

Occasionally I passed tracks leading back into suburban streets.

At 8.13 am I caught a view of some curvy hills in the Tinderbox area headlands way in the far distance. 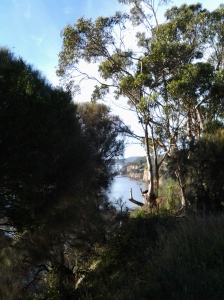 At 8.21 am I reached a second Suncoast Headlands Walking Track sign which indicated where the path lay.

However there were no clearly discernible paths across large expanses of mown grass.  I did the best I could and soon found myself at the Sewage Treatment Plant on the edge of the Derwent.  For a short while I followed a track down to the rocky shore, but at a certain point it was clear that if I reached the water level (and the descent didn’t look anything but potentially dangerous), there would be no way up on the other side of the Treatment Plant.  I retraced my steps. Then I tried to walk along the fence line in front of the Plant, but I soon found this way was impassable.  Wily blackberry canes thwarted further progress. The steep drop to the shore was frightening. And more Kookaburras were laughing. Ha. Ha. Ha. H. H. H. H. Ha. Ha.  So, again I retraced my steps and decided to walk inland along and around the Sewage Treatment Plant’s fence line. There was a semblance of a track on my new route, but obviously I had missed the main ‘thoroughfare’.

I was glad to have walked this way because, for a part of it, I enjoyed moist mosses softly cushioning each footstep.  These mosses were bright lime green in colour.  Soon afterwards, I walked across an area where tall grasses had recently been slashed making it easy to continue.  Of course I did not know where I was going track-wise so, with the sun as my guide, I simply made sure I continued southwards. Once I reached a cleared open meadow with barely visible tracks, I had warmed up, my jacket was off, and I was standing opposite the South Arm township on the eastern shore.  I walked onwards and spotted a tiny yellow sign 50 metres away. From there, at 8.40am, I crossed over the bitumen road that leads to the Sewage Treatment Plant, signed as the Blackmans Bay Wastewater Treatment Plant.

Over the road was a delightful short zig zag track down to an unnamed creek, with a small foot bridge to ensure easy access to the other side.

I walked through a peaceful grove of gum and wattle trees and found, on the other side, a sign indicating I could walk left or right on a bush loop. I turned left towards the River.  When the loop turned inland away from the River I rechecked my maps and could see the track would never be near the River. I made the decision to retrace my steps and began to continue inland with the intention of reaching Tinderbox Road.

I walked on a gravel track next to the creek until I reached a most unexpected site: a very large area fenced in and designated as a Dog Exercise Area. This is set up with tyres for dogs to jump through, and rows of poles that dogs can practice some sort of slalom around. As I walked past, a massive mowing tractor-like piece of equipment rumbled up and down the large paddock shaving the grass.

Blackberries galore, waiting to be picked for the pies, lined the creek side of the track next to the Dog Exercise Area.

A few minutes before 9am, I turned left onto the bitumen road that went downhill to the Sewage Treatment Plant and uphill to Tinderbox Road. On the uphill trek I walked between the dense bush and flitting bush birds while listening to their bush songs: Tweets, Chirps, Squeaks and Warbles.

The day was perfect for walking so I began to wonder whether I should aim for the mouth of the Derwent River at Pearsons Point, rather than Fossil Cove many kilometres before the final headland.  As I continued up Treatment Plant Road, and past the Blackmans Bay Scouting Camp buildings (for Joeys, Cubs, Scouts and Venturers) the temptation to head to the mouth strengthened. I reasoned that the day was young, the weather wasn’t too hot or cold and it wasn’t raining, and my feet hadn’t failed me.

At Tinderbox Road I turned left a few minutes after 9am, with the resolve to reach Pearsons Point.