By 12.50 pm I had walked to the Icehouse Bluff and was starting on the return journey north along the beach to the boat ramp further along the beach and close to where I had eaten lunch. The bitumen ramp presented an easy incline to walk up to the Bangor street bus turning circle of Opossum Bay.  But I never made it that far.

Rather, some way along, I noticed the semblance of a rough-staired track up the gum lined hill next to the beach. Heavy yellow ropes were attached to the occasional stick to give the impression of a supportive rail. At best this turned out to be an additional guide on the direction that the path took. 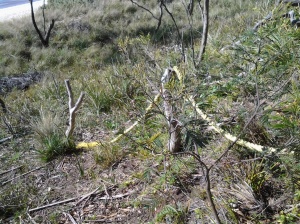 I thumped across the lower bracken, stumpy grasses and fallen branches, hoping that these vibrations through the ground would frighten away any snake that might be meandering in the vicinity. I reached the lower steps covered with a mesh of fine branches and dry gum leaves, detoured and  dragged myself up the steep incline, throwing to the side any miscreant branch that had settled across the rough stairs.  At the top I was surprised this wasn’t a public track, albeit seldom used, rather it led to the back garden of a house. The bush was sufficiently dense either side to disincline me to bash my way in any direction.  Besides I had no idea how far I would need to bash my way along through the bush.  I did what I cannot recommend to others (what I would recommend is that you do not take the staired track up the hill). I was simply taking the easy way out for me. I walked through that back yard, to the driveway and out onto the street.  I have no doubt that in the Opossum Bay as a community style neighbourhood, I will have been seen and remarked on. Out on the street I walked along to the bus stop.

I could have waited for the bus here (although there were no seats or shady buildings). However, since the bus wasn’t scheduled to arrive until 2pm, I had time to fill and decided to walk back to the Opossum Bay shop and catch the bus from there.

Walking along Bangor St I passed local houses and another bus stop 200 metres later. I continued until I reached a T junction passing some plump running rabbits. I turned right into Driftwood Drive and continued until the next T junction with South Arm Road. By now I could see the Derwent River again plus some of the shacks and houses that line the Opossum Bay beach.

Turning left at this T junction, I walked on the road above and parallel to the beach (although I could have taken steps down and re-enjoyed the beach experience). There are a couple of bus stops along this road; at Marsh St, and at Howlin Lane.  It was close to 1.30pm when I reached the Public Toilets, and a few minutes later I had reached the outdoor seating at the Opossum Bay shop.

The couple who sat down nearby were lost. Holidaying from Melbourne, their destination was Howrah but in driving to Opossum Bay they had travelled more than half an hour out of their way.  Fortunately, I carried a street directory with me which they pored over and helped them to understand exactly where they needed to travel.  You never know the resources which people around you might have. So many people have helped me through my life so it’s terrific to be able to help other travellers.