Leaving the main road allowed me to reflect on one of the unpleasant side effects of mankind’s ‘progress’. Every Australian who drives on a rural road (and even when on some suburban streets) knows our native animals make unexpected crossings. One minute the road is clear and then the next second something is running or hopping in the path of your vehicle. I was startled by the number of newly dead animals and birds, and the number of different aged skeletons of their ancestors, which had been on or beside the road in the first few kilometres of my walk along the Derwent River.  In a car, you are on and off the dead animal in a split second and your brain has little time to process what you have just seen and felt.  But at a walking pace I had lots of time to look at their remains and think.

I think these little fellows might have been Bennett’s Wallabies. 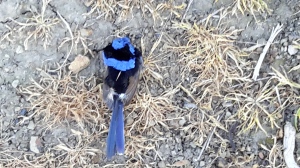 The long tail indicates this skeleton is the remains of a wallaby.

Once healthy and vitally alive possums.

One landowner was determined that possums should not run up his trees. Clearly, if possums cannot climb their natural habitat and sleep safely, then the chances of them attempting to cross roads and be killed are increased.

I noticed other ‘skeletons’ on road verges: man-made objects also ended their lives in patterns similar to those of animal skeletons. 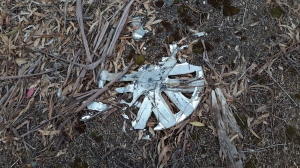 Of course these hubcaps are not biodegradable and won’t break down easily and return to the earth as renewable energy.

It seems we accept everything is expendable.