I decided to find out what I had missed by not stopping off at the York Hotel on Stage 8 of my walk.

The Hotel’s web site is at http://yorkhotelgranton.com.au/ and offers lots of information and photographs. Its secondary name is ‘Home of the 12 Mile Steakhouse’.  The site says that ‘making a booking is especially important from Thursday to Sunday’ so I can only assume the restaurant does a thriving business. Apparently “…head chef Rick Schultz has been a chef for 30 years both in Australia and overseas. Where ever possible products are sourced locally and the Kitchen staff pride themselves on using only the freshest ingredients.”

I was interested to know the Hotel’s history. The Hotel’s website offered: ‘Re opening on the 18th of December 2011 after renovations, this Tasmanian family owned Hotel has seen major changes including renovated restaurant, kitchen and a new bar and beer garden. The York Hotel is rich in history after first opening in 1836 as an Inn. Many of the original sandstone walls have been retained in the renovation process.’ The Hotel also has its own Facebook site: https://www.facebook.com/pages/The-York-Hotel-12-Mile-Steakhouse/158032947634196 containing lots of happy party shots.

According to Glenys Cruikshank at https://www.flickr.com/photos/36529448@N07/3461732443/, ‘Once used as a coaching stop. Built before 1849.Prince Alfred (Duke of Edinburgh) on the first royal visit to Tasmania, changed horses here, and stepped inside for a glass of ale.’

On a less attractive side, a news story in February this year reported ‘Second Hold Up at Granton Hotel’ (http://www.abc.net.au/news/2014-02-11/second-hold-up-at-granton-hotel/5251770). ‘The York Hotel at Granton has been held up for the second time in nine months. Police say a man approached the hotel’s owner as he was leaving to take cash to the bank. It’s believed he had a knife. The police helicopter has been involved in the search and officers have also conducted line searches on the nearby river bank.’

The York Hotel looked as follows in 1953 (photo courtesy of https://www.historypin.org/channels/view/45807/#!photos/list/) 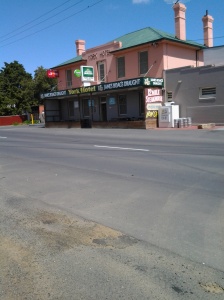 There is a self-published book, The pubs of Glenorchy authored by Donald Howatson in 2011, which may throw more light on the history of the York Hotel.  I have yet to locate a copy.