10 hours later Andrew woke at first light around 5.30 am, got up and packed. Ahead lay the steepest country as the river entered a narrow gorge. It was an early start and, after walking a quite short distance of increasing difficulty, it became clear that the risks for tackling some of the trickier later sections were increasing, especially for a solo walker in an environment where getting help could be awkward should an injury occur. This was an area where internet and mobile phone coverage is non-existent, and only a Personal Locator Beacon/EPIRB could alert others if any difficulty was incurred. 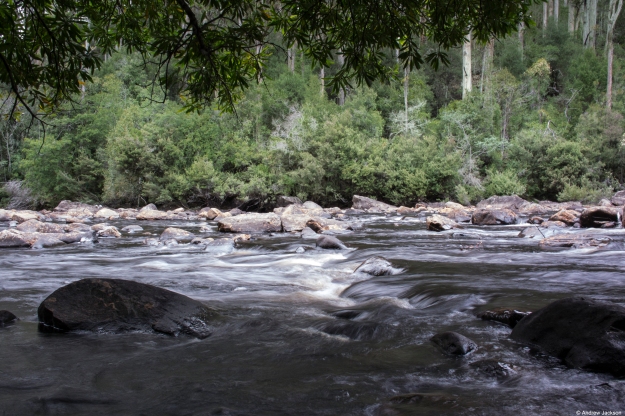 The prospect of becoming cliffed-out or stuck in scrub on the wrong side of an impassable deep pool and having to backtrack had little appeal. So Andrew made the only sensible decision possible; he decided that the prudent thing to do would be to climb out of the valley and complete the walk to Wayatinah overland.

The tennis shoes were removed and packed and walking boots refitted, before Andrew loaded up with 2.5 litres of water (enough to get to Wayatinah). Actioning his decision to leave the river was not easy with the dense overhanging vegetation providing continuous obstacles. However, tackling those thickets was preferable to trying to walk in faster flowing water with fewer and fewer rocks above the water level.

The map showed the hill would be very steep, and with a pack weighed down with the fresh water, the trek promised great difficulty.  Andrew found the easiest exit from the river before starting up slippery embankments, and then the hard slog of climbing over and ducking under fallen trees. 5796 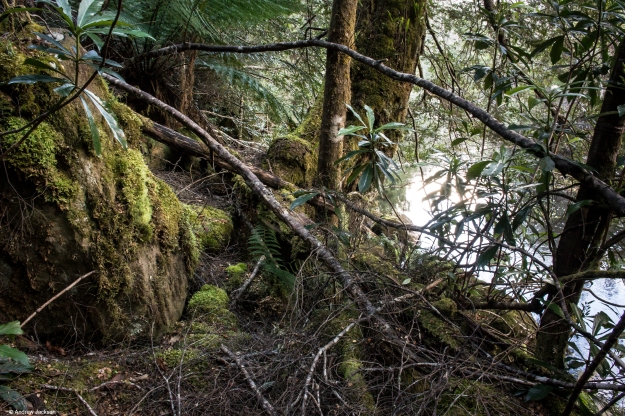 He was faced with challenges such as negotiating the large fallen tree trunks, scrappy undergrowth and rocks covered with slippery mosses as shown in the photo below. For much of the walking this bush, the vegetation was scruffy and rigid. Walking through unyielding vegetation saps the strength. Not for the faint hearted. 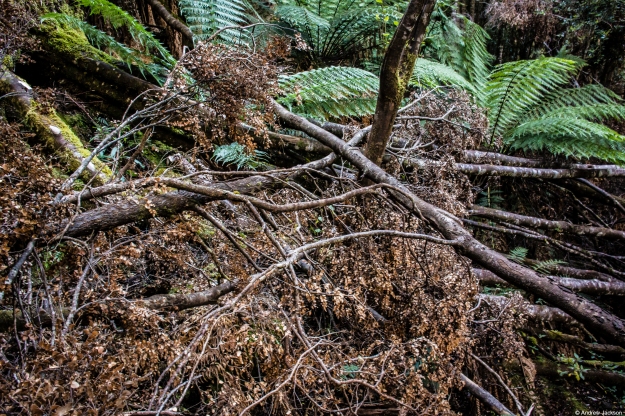 Disappointed at having to leave the river, and while struggling on the strenuous steep upward scrub-bash, he hoped that the effort of the climb would be justified. As partial reward, along the way dark groves of old myrtles, stately stands of sassafras and tall tree ferns were passed as the gradient eased.

Eventually the climb brought him to the edge of pine tree plantations on the surrounding plateau. From there it was a comparatively easy matter of following old logging tracks, then walking along progressively improving gravel roads.