In ancient Greece, the Styx was a deity and also a river that formed a boundary between earth and the underworld, and was one which had miraculous powers. In texts such as Dante’s The Divine Comedy, the Styx figures as a metaphor for Hell. I suspect many countries in the world contain a river named the Styx and that for some people, their river connects with Hell or with an earlier characteristic from Greek mythology. There are a number of Styx rivers across Australia.

Tasmania’s Styx river feeds the Derwent when it flows into that River along the edges of the Bushy Park Sports Oval. Our Styx River, a wild one racing through narrow gorges and bristling over rapids in many sections, starts its life in the wilderness near Mount Mueller further west and south of Maydena before travelling past dense ancient forests. I can imagine for our early settlers, the inaccessibility of the river, the rugged surrounding landscape, and the virtual impenetrability of the vegetation would have made this territory seem like hell.  To compound their problems, constant heavy rain falls, cold miserable conditions in winter and fiendishly hot days in summer would have made their lives hell. Yet, over time, the forestry industry found ways near the Styx River to log old-growth forests. Regrettably.

Back to my walk.

I survived a quick jog over the Styx River road bridge without being mown down by vehicular traffic, and stopped to look at the water rustling beneath. 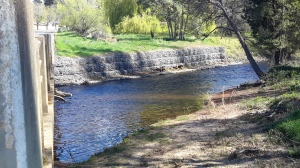 I rested nearby to enjoy the sound of the water and the comparatively cool air.

2 thoughts on “The Styx River”