Friend Ka suggested that ,in my walks along the Derwent River, I may have become what the French term, a flâneur.

I had never heard this wonderful word before, and with a little research discovered a great deal of information – and some very heavy stuff. After reading it all, I wonder – am I un flâneur, or not? The Oxford Dictionaries informed me a flâneur is “A man who saunters around observing society” and is derived from the French flâner meaning to ‘saunter, lounge’.

Wikipedia offered further information: “The flâneur was a literary type from 19th century  France, essential to any picture of the streets of Paris. The word carried a set of rich associations: the man of leisure, the idler, the urban explorer, the connoisseur of the street.  The flâneur was defined by Larousse in ambivalent terms, equal parts curiosity and laziness and he presented a taxonomy of flânerie – flâneurs of the boulevards, of parks, of the arcades, of cafés, mindless flâneurs and intelligent flâneurs. The image below is by artist Paul Gavarni in 1842 and titled Le Flâneur. 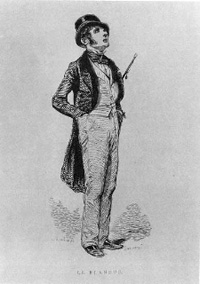 Wikipedia continued: In the 1860s Charles Baudelaire presented a memorable portrait of the flâneur as the artist-poet of the modern metropolis: The crowd is his element, as the air is that of birds and water of fishes. His passion and his profession are to become one flesh with the crowd. For the perfect flâneur, for the passionate spectator, it is an immense joy to set up house in the heart of the multitude, amid the ebb and flow of movement, in the midst of the fugitive and the infinite. To be away from home and yet to feel oneself everywhere at home; to see the world, to be at the centre of the world, and yet to remain hidden from the world – impartial natures which the tongue can but clumsily define. The spectator is a prince who everywhere rejoices in his incognito. The lover of life makes the whole world his family. Thus the lover of universal life enters into the crowd as though it were an immense reservoir of electrical energy. Or we might liken him to a mirror as vast as the crowd itself; or to a kaleidoscope gifted with consciousness, responding to each one of its movements and reproducing the multiplicity of life and the flickering grace of all the elements of life. Charles Baudelaire, “The Painter of Modern Life”, (New York: Da Capo Press, 1964). Orig. published in Le Figaro, in 1863.”

The website for The Arcades Project at http://www.thelemming.com/lemming/dissertation-web/home/flaneur.html explained that “Flâneur” is a word understood intuitively by the French to mean “stroller, idler, walker. He has been portrayed in the past as a well-dressed man, strolling leisurely through the Parisian arcades of the nineteenth century – a shopper with no intention to buy. Traditionally the traits that mark the flâneur are wealth, education, and idleness. He strolls to pass the time that his wealth affords him, treating the people who pass and the objects he sees as texts for his own pleasure. An anonymous face in the multitude, the flâneur is free to probe his surroundings for clues and hints that may go unnoticed by the others.  As a member of the crowd that populates the streets, the flâneur participates physically in the text that he observes while performing a transient and aloof autonomy with a ‘cool but curious eye’ that studies the constantly changing spectacle that parades before him (Rignall 112). As an observer, the flâneur exists as both ‘active and intellectual’ (Burton 1). The flâneur  has no specific relationship with any individual, yet he establishes a temporary, yet deeply empathetic and intimate relationship with all that he sees – writing a bit of himself into the margins of the text in which he is immersed. Walter Benjamin posits in his description of the flâneur that ‘He flows like thought through his physical surroundings, walking in a meditative trance, (Lopate 88), gazing into the passing scene as others have gazed into campfires, yet ‘remain[ing] alert and vigilant’ all the while (Missac 61). The flâneur is acutely aware, a potent intellectual force of keen observation – a detective without a lead. If he were cast as a character in the ‘drama of the world’, he would be its consciousness.”

The Paris Review at http://www.theparisreview.org/blog/2013/10/17/in-praise-of-the-flaneur/ remarked: “the idea of flânerie as a desirable lifestyle has fallen out of favour, due to some arcane combination of increasing productivity – hello, fruits of the Industrial Revolution! – and the modern horror at the thought of doing absolutely nothing. But, as we grow inexorably busier – due in large part to the influence of technology – might flânerie be due for a revival?”

Am I … can I be a flâneur? Whatever the answer to this question I am so grateful for Ka introducing me to this fabulous new word and all its ideas.