The water volume (in quantity and sound) increased again where Beech Creek announced its arrival, bringing water from the large catchment around Mt Shakespeare.

Andrew reached this section of the Derwent around 5.45 pm. Approximately 9 km of the River’s length had been walked through the day. Having first arrived at the river’s edge around 10.50 am, clearly the difficulty of walking the river is apparent. 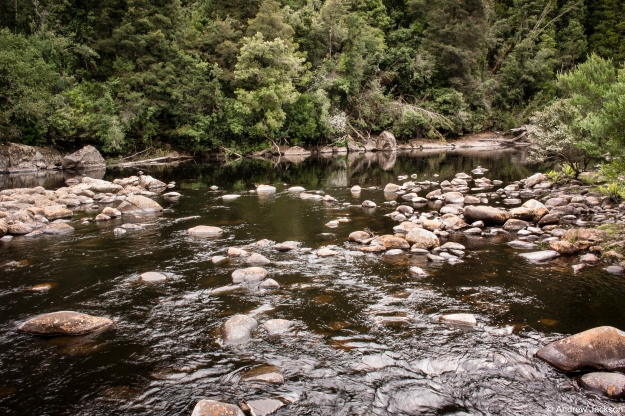 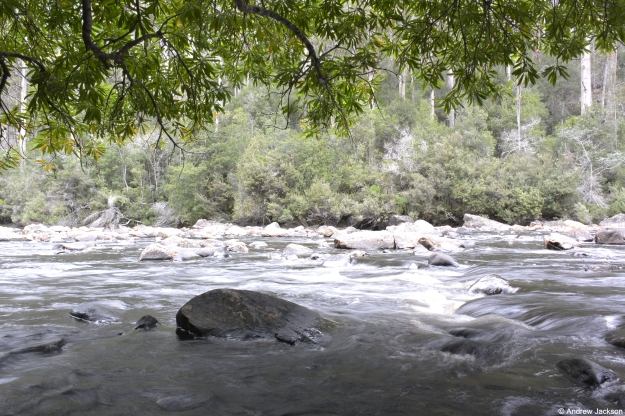 As the river level rose and the water speed increased, the process of walking downstream slowed. It was taking increasing time to find a safe route. The river was crossed frequently, looking for the most efficient route. At the same time, the river bank edges rose dramatically and the river entered a series of bends. The banks on the outer edge of the bends were invariably steep where the river had cut into the landscape, and the inner edge provided more exposed boulders. Between the bends were large, deep pools with the water moving more slowly. It became increasingly difficult to cross the river above or below these pools and a lot of time was spent scouting the best way forward. It sometimes became a choice of making a difficult crossing in sometimes fast flowing water; clambering up, over, around the flood debris on the river banks; or pushing uphill through tangling scrub and over fallen logs to bypass the cliffs at the water’s edge. Remember all of this activity occurred while carrying a backpack with the weight of overnight gear.

Only once did Andrew fall in the river; after all the inevitable small tumbles and stumbles this was the only mishap. Having picked a sturdy looking large rock to stand on, when it rolled Andrew landed waist deep but feet first in a pool of water.