Today I watched a family of Dominican Gulls at Howrah Beach on the Derwent River.

When the temperature rose, I meandered off towards the Derwent River beckoned by the thought of a peaceful walk along a beach (albeit one that I walked on an earlier stage of my trek from the mouth to the source of the River). By the time I reached the end of Bellerive Beach I was feeling very good about the world and so I continued around the point and down onto the people-less Howrah Beach.

The only life was a pair of adult Dominican Gulls and their three immature offspring fishing.

Two surprised me.  From a distance I could see that one adult and one immature were active on the sand where the wash of gentle waves covered their feet from time to time. Each had food of some sort which they couldn’t seem to swallow.  How they tried!  When I walked closer, it was clear both birds were playing with exotic Seastars, with their five brightly orange-coloured arms. 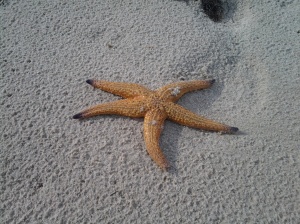 The immature bird played with a tiny starfish, while the adult focused on a much larger version.  While I watched, both birds battled with their prey, sometimes getting it into their mouth then usually it was disgorged immediately. The shape of bird throats and the shape of the food source were seemingly incompatible. Apart from the challenge of five thick arms which are not particularly pliable, the surface of the starfish is a little knobbly, so I could not believe the birds would have any success getting them ‘down the hatch’.

But then my mouth dropped open in amazement. The immature bird suddenly swallowed his Seastar.   Gulp.  And s/he waded off looking for more. Now that was a feat!

After today’s experience, I wonder whether the Dominican Gulls are finding these Seastars sufficiently tasty so that they will seek them out deliberately.  Perhaps these Gulls will become the natural predator to help reduce the Seastar plague on our native species.  But it looks like hard work to me. Not a comfortable swallow.

4 thoughts on “Have the invading Seastars been discovered by a mortal enemy?”