At 3pm I turned left onto Roslyn Ave having walked up from Boronia Beach. Within 10 minutes I could see Blackmans Bay Beach. 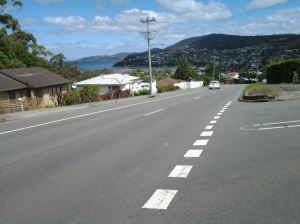 Five minutes later I turned left at Blowhole Road in search of a Blowhole. The road was narrow with no pathway and limited edges on which to walk.  Wattle trees were blooming and I passed an apple orchard laden with red globes. Flowering gums are spectacular at the moment. 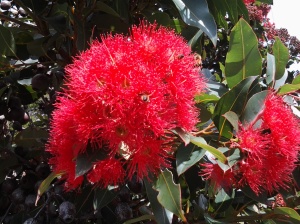 I reached the Blowhole sign, which indicated the entrance to a small park on a hill at the northern end of Blackmans Bay Beach, at 3.22 pm. 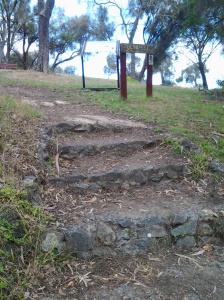 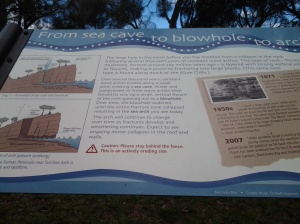 The weather wasn’t gusty and so the water ebbed and flowed rhythmically but undramatically beneath a rock bridge. There was no blowing of water through the gap. 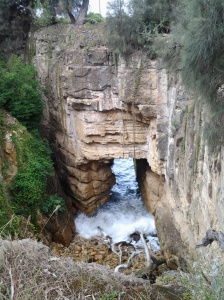 I continued down hill. 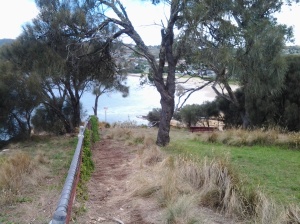 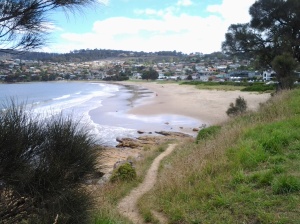 I reached beach level at 3.34pm and proceeded to walk on the path beside Ocean Esplanade. Inset into the pavement were handmade tiles and mosaics presumably made by community effort.  These were similar to those impressed into the footpath in parts of Kingston. 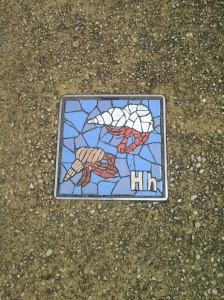 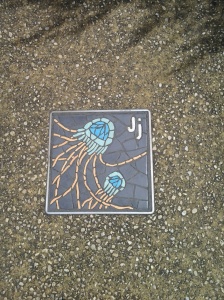 A little way along the Esplanade public toilets and a kid’s playground provided useful amenities.

I decided to stop, look, listen and smell. Looking over the Derwent River to the South Arm peninsula and around about me watching people enjoying the beach and surrounds, listening to the seagulls calling, and smelling the salty air kept me seated for 10 minutes. I had walked two thirds of the way along Blackmans Bay Beach and it seemed a reasonable place to stop for Stage 12.  So I headed for  a bus stop.  I found one by turning into Hazell St and then into Wells Parade.  As I arrived at the stop, a Metro bus came over the hill in the distance.  Wonderful timing.  It was 4pm. The experiences of the day had been rich. I enjoyed the bus trip back into Hobart via the main Kingston shopping centre, and then the southern outlet highway. The view when we came to the top of the final hill is majestic (please ignore the dirty bus windows in the photos below). 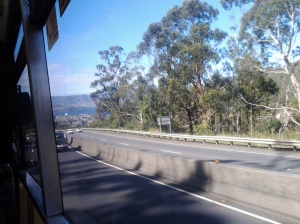 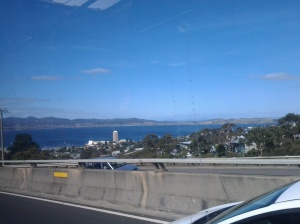 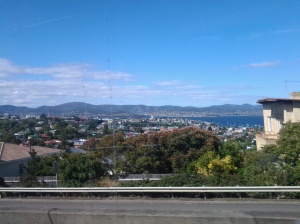 Some of Hobart and the eastern shore suburbs are laid out below with the blue Derwent River flowing between. Always stunning. After half an hour on the bus I arrived in Hobart city, then headed off for my Bellerive bus and was home before 5pm.  All together a brilliant day.  Stage 12 was complete!  Because of personal commitments and what I have seen in the weather forecast, I do not expect to walk Stage 13 until next week.