I retraced my steps from Cape Direction and Pot Bay to the Lone Pine Memorial.

On the Pot Bay beach I passed an amazing driftwood ‘shack’ on the beach, as shown in the photo below. Are those underpants swinging from on high?

After a refreshed look at the Lone Pine Memorial, at 10.25 am (only 1 hour 20 mins since I had left the bus – yet, because I had seen and thought about so many things, the time felt much longer), I turned towards the point of Cape Deliverance. Before doing so, I clicked the photo below which scans Fort Beach towards Johns Point.

The vehicle track, which wound down the hill towards the Derwent then switched back in the direction of Fort Direction seemed the perfect way to get myself down onto the sandy Fort Beach. Twenty or so minutes later I reached the western end of the beach and easily walked up onto Blessington Road.   The alternative would have been to round John’s Point and continue along to South Arm almost entirely by clambering over a rocky shore.  Of course this was possible however, I reasoned that it would take a lot longer to reach my destination. While walking on the very long Blessington Road, I noticed a couple of public walkways down to the shore, so that if a walker started at the river level they could come up to the road at a later time. A couple of empty house blocks with a water frontage made me consider whether these might provide a way to move from the shore to the road – but they are privately owned so careful thought would be needed before deciding to walk across these.

Half an hour later I reached the cross street Rosemount Lane, a short street which took me down to the South Arm Road.  I continued west towards the South Arm beach, passing by the prominent Cenotaph that remembered many wars including the more recent Iraqi war. 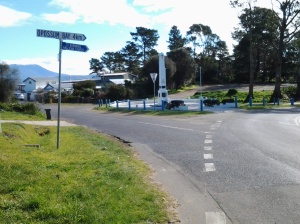